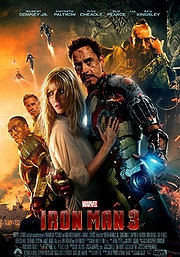 The curse of the trilogy is a well documented phenomenon. Just utter the words “The Godfather: Part III” in a room full of film buffs and you’ll elicit a collective shudder of horror. Everywhere you look, unwanted third-parters hide away, ignored like an ugly triplet. Even last year’s The Dark Knight Rises marked a disappointingly confused conclusion to Christopher Nolan’s Batman trilogy.

Maybe the key to the latest Iron Man film’s success, then, is that it’s not strictly the third part of a trilogy. Coming after last year’s Avengers Assemble, this is more Iron Man 3b than Iron Man 3. And, in being freed from the restrictive shackles of the trilogy format, it has been allowed to flourish under its own terms. Shane Black – the man behind the Lethal Weapon screenplays and Kiss Kiss Bang Bang – has taken the helm from Jon Favreau, resulting in a film which crackles with the sort of humour that made Joss Whedon’s Avengers a cut above the ordinary. You only have to discover that Eiffel 65’s abysmal Euro-techno hit “Blue” is the first song on the soundtrack to work out what’s in store for you. Iron Man 3 is tongue-in-cheek, in-your-face and going to make you laugh. A lot. 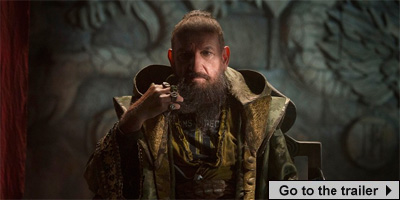 We open with a flashback. It’s December 31st 1999 and a fresh-faced Tony Stark (Downey Jr) is ringing in the new year with gifted (/sexy) scientist Maya Hansen (Rebecca Hall). On their way to Maya’s hotel room, they have a run-in with a pimpled nerd by the name of Aldrich Killian (Pearce), who is desperate to work with the famous Stark. Stark rebuffs Killian with a cruel prank, spends the night with Maya and the next morning is gone. Fast forward thirteen years and Stark is suffering from insomnia, unable to function following the events of Avengers Assemble, and spends his nights tinkering with his various suits. Long suffering gal pal Pepper (Paltrow) is tiring of Stark’s obsession, while best pal James Rhodes (Don Cheadle) is concerned that Tony has serious issues – particularly after he has a panic attack in a family restaurant.

Enter the Mandarin (Sir Ben Kingsley), a terrorist with a Southern preacher’s drawl, Samurai topknot and no capacity for bargaining. The Mandarin seemingly wants only one thing: to bring down the US through acts of terror. What’s more, Aldrich Killian is back on the scene – now suited, booted and buff – trying to convince old co-worker Pepper to come on board with an experimental drug named Extremis. With the Mandarin blowing up innocents, and Killian moving in on his missus, Stark must put aside his anxiety to – once again – save the world, and his relationship in the process. 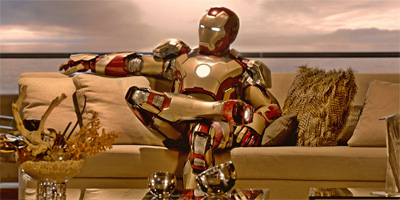 You might wonder where a Marvel film could go after the huge spectacle of last year’s Avengers. Very wisely, Black and co-writer Drew Pearce’s solution is to take their character back to basics. Following an altercation with the Mandarin, Tony finds himself bereft of wealth, friends and – worst of all – his suit. In stripping away everything that seemingly makes Stark a hero, Pearce and Black tap into what makes any origin story appealing. Whether it’s Peter Parker making his first suit, or Bruce Wayne discovering the bat cave, it’s always satisfying to see our heroes relying on their ingenuity and resourcefulness, all superhero skills aside.

What’s more, Robert Downey Jr is at the top of his game here. In his hands the screenplay fizzles with a kind of frenetic energy – it’s all fast-talking, poorly timed quips and pointed insults at his temporary cute kid sidekick Harley (“Dads leave, there’s no need to be a pussy about it”). Pearce and Black certainly owe a debt to Joss Whedon – perhaps just for illustrating that the comedic boundaries can be pushed in these films – but there’s a distinctive edginess to the dialogue that sets the tone of Iron Man 3 apart from Avengers Assemble. The best stuff here is what Shane Black is known for – witty, barbed back-and-forths between two mismatched characters. It’s clear this is what Black does best and – when you’ve got performers as good as Downey Jr, Cheadle, Kingsley and even little Ty Simpkins as Harley on board – you can’t help but laugh at every gag. 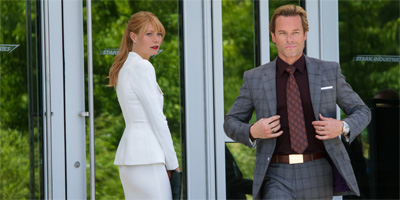 Some might quibble with what they would perceive as Black throwing the story under the bus for the sake of a good joke. But Iron Man 3 isn’t slipshod or thoughtless in its execution. Whether it’s the expertly choreographed sequence in which Tony saves the crew of a crashing plane from their mid-air fall, Pepper’s entanglement with the baddies, or the (quite literally) explosive finale, Black is a director who knows just how and when to focus in on the plot and keep the story hurtling along.

Perhaps the moment in Iron Man 3 most telling of Black’s directorial vision is where Killian comments that all subtlety has gone out the window ever since “that guy with the hammer fell from the sky”. It’s a clever nod to the direction this genre is moving in – bombastic, laugh-out-loud entertainment in place of gritty, po-faced reboots. But it’s also Black letting us in on a little secret – we shouldn’t take these films too seriously, and that’s just fine.