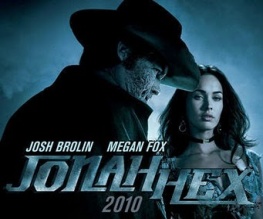 Apparently, Jonah Hex was a comic book antihero before he became a big-screen hyperflop. The difference is, the comic book just made him a wise-cracking gunslinger with a burnt cheek, whereas in the film he’s some sort of heavily armed Ghost Whisperer with a persecution complex and a scruffy hat. Furthermore, it’s been ineptly brought to life by a director whose only previous experience was with the enduring modern classic Horton Hears a Who (which he didn’t even make on his own). It’s almost impossible to adequately chart how disappointing this film was, but I promise I’ll do my best.

Here’s where the film starts, although most of it doesn’t become apparent til later. Jonah Hex (Brolin), once the pride of the Confederate States’ army, disobeyed a direct order from his commander General Turnbull (a woefully wasted John Malkovich) and when challenged by his best friend/Turnbull’s son he killed him. In return, Turnbull brands Hex’s cheek with a rather natty ‘QT’ logo and burns his family alive. Left hanging on a cross for days, Hex is eventually rescued by Crow Indians who restore him to life with some native mumbo-jumbo (that level of implied racism is pretty much par for the course) but leave him with the ability to raise the dead for the purposes of conversation and fact-finding.

Hex carves out a life as a ridiculous bounty hunter, but is recalled into military service when Turnbull, now known as ‘El Terrorista’, begins to construct a super-weapon to make sure that the USA’s centenary celebrations go off with a bang. Backed up by some prostitute or other (Fox, who could probably put “some prostitute or other” on her business cards), Hex rampages across the South whilst killing people with reckless abandon, absurd weapons and surprisingly little actual violence, and then some more implausible stuff happens and the credits roll. To add insult to injury, you then discover that the film was only 73 minutes long, so you’ve paid £10 for at least twenty minutes less time away from the cruel world than you’d expected. It’s a bitter blow.

The above photo (which, for the record, shows only one of the two horse-mounted Gatling guns Hex is packing) encapsulates most of what’s ridiculous about Jonah Hex. It’s reminiscent of Van Helsing insofar as it features a gritty lone ranger type fighting megalomaniac bad guys with the aid of some improbable weaponry, but where Hugh Jackman was relaxed and happy to acknowledge the slightly silly nature of the project Josh Brolin is loath to admit that he isn’t actually Clint Eastwood. There’s almost no attempt at comic relief – he doesn’t even have a bloody sidekick! – and if it wasn’t for Malkovich’s turn as a deliciously melodramatic troublemaker you could be forgiven for thinking that this fancied itself as a real film.

The make-up’s bad (even if it had been well done, Imhotep has the hole-in-the-cheek gig sewn up), the CGI’s dreadful, the dynamite crossbows are impractical and the violence has been very obviously cut to drag down the US rating to a PG-13. In fact, you can feel the cuts throughout – if you make a film 90 or 100 minutes long and then scissor massive chunks out of it, as seems to have happened, then you simply can’t hold on to a coherent plot. Consequently, Jonah jumps from gunfight to gallop to gimlet-eyed glaring (and even to things which don’t alliterate) with no consideration for whether the audience is keeping up.

Mind you, in the cinema I went to the audience for Jonah Hex consisted of: me. Just me. That probably tells you all you need to know.