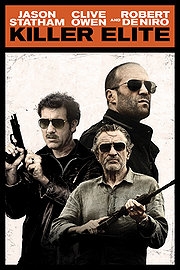 If there’s a checklist for a Jason Statham movie, Killer Elite almost certainly ticks all the boxes. Cars blow up within the first six minutes of screen time, people are murdered in creative , ironic ways (stabbing a painter to death with his own paintbrush do anything for you?) and of course, our protagonist is gruffer then a bear with its period. Throw in some choice action scenes – one involving Statham annihilating a room full of men while strapped to a chair – and one Robert De Niro and you should have the throwaway action movie of the year. Unfortunately, this is not the case for Killer Elite. While the film could have comfortably been a ball-to-the-wall action flick, it instead constantly struggles in an attempt to be. It’s needlessly complicated, politically aspirational and far too long. Killer Elite opens on hitman Danny (Statham) and his long-time mentor Hunter (De Niro) finishing yet another successful mission in the crazy old year of 1980. Like all good ageing hitmen, Danny professes that he’s done with the mercenary racket and subsequently returns to Australia to revel in the joy of simple things. It works for a bit, too. He gets a lovely girlfriend (Strahovski) who, like any good blonde woman in an action film, exists solely to show us how tender our hard-as-nails anti-hero truly is. However, Danny’s pastoral paradise gets turned on its ear when Hunter is held captive by an ageing oil sheikh whose three sons were killed by SAS men. The dying sheikh summons Danny to Oman, where Hunter is being held in his personal home prison. His mission for Danny is simple: Kill the three SAS men, make them look like accidents and take lots of photos as proof. Danny journeys to London to take care of bid’ness with his old buddies Meier (Aden Young) and Davies (Dominic Purcell). So far, so simple.

It’s here when we get introduced to “The Feathermen” a secret society of ex-SAS old bastards who control… things. I’m not sure what things exactly, but it’s implied that they’re directly involved in the diplomacy of oil, and it’s 1980 damnit, oil is hot. The highly illegal squadron quietly arranges assassinations in order to loosen up those highly lucrative oil strings for England. Helping them with this is Spike, Clive Owen with a creepy moustache. Him and Danny inevitably clash paws. The plot grows slowly more muddled, people find themselves repeatedly walking into traps and Danny is ultimately invincible, whether or not you want him to be. The problem with Killer Elite isn’t the plot per se, more the overwhelming feeling that multiple unrelated plots and characters are being smashed together with little regard for how they mix. Separately, Clive Owen’s Spike and his frustrated dealings with The Feathermen could be an inviting film: likewise, Statham’s unkillable hit-man is a worthy enough character for any straightforward action movie. Unfortunately, the melding of these two elements results in a confusing, poorly scripted and tediously long adventure. There’s some credible fight scenes, but overall the film tries agonisingly hard to be cleverer then it is. The performances are fine, but only if you take an average between Clive Owen’s over-performance and Robert De Niro’s phoned-in one. De Niro’s character exists as little more then a jumped-up cameo, and is probably the easiest 18 days of work the former acting giant has ever done. Statham is Statham: he bishes, he bashes, he hints at a deep ocean of melancholy.

Overall, Killer Elite gets points for ambition: it genuinely does seem to be determined to be a thinking man’s action film. However, the clumsy execution leaves it way off the mark.

Previous: Top 10 Most Depressing Films EVER Made
Next: Set-Up