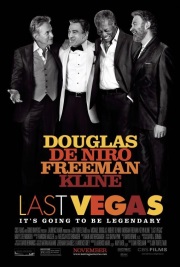 When the trailer for Last Vegas landed back in May, the serried ranks of Best For Film were united in their belief that Jon Turtletaub’s latest would be unforgivably awful. We were wrong. Predictable, underwritten and derivative, there’s certainly nothing very special about Last Vegas – but it’s a perfectly harmless film. If your grandma said she’d have liked The Hangover but for all the swearing, take her to see this.

The year is nineteen fifty-something, and a gang of slightly spoddy kids are cracking wise in the sort of American corner shop that Bill Bryson won’t shut up about. There’s a babe, too, and two of the kids are obviously very interested in her. What will happen? Well, FIFTY-EIGHT YEARS LATER (thanks, title card) we’re reintroduced, one by one, to the Four Spods. Billy (Michael Douglas) is some sort of Hollywood hotshot with a trophy girlfriend and a house made of glass. Archie (Morgan Freeman) is a grandfather with a patronising son and a nice line in stroke medication. Sam (Kevin Kline) is stuck in somewhere, maybe Florida?, with his wife and a load of other old people who really like Aquacise, and Paddy (De Niro) is in a filthy flat on his own, because remember the babe? Yeah, she just died.

Then one of Billy’s pals dies, too, and while he’s giving the eulogy at his funeral he accidentally proposes to his trophy girlfriend. As the last one of the Four Spods to get married, Sam and Archie insist on throwing him a bachelor party – after all, Billy organised all of theirs. The only problem – how are they going to get Paddy to come to Las Vegas? You can’t wear a bathrobe that smells of piss in Las Vegas, and anyway he hates Billy. DRAMA.

Anyway, they all make it to Las Vegas and have relatively gentle hi-jinks, judging wet t-shirt contests and winning over Vegas slags with their old-school manners and willingness to punch people for little or no reason. Also, they win a load of money and displace Fiddy Cent from his penthouse suite. Also also, Clara Clayton from Back to the Future: Part III is there! Hi, Clara! Are you going to spark an awkward but basically easily sorted out love triangle? Sure you are. You get the idea – Last Vegas plays out exactly like The Hangover running at half speed, with all the smut and most of the swearing taken out and replaced with Kevin Kline nervously waving around a Viagra taped to a postcard. The other three seem to be enjoying themselves – God knows this isn’t a film designed to stretch any of the actors, but all four (even the perma-tanned Douglas) seem happy to play up their advancing age.

There are a few genuinely great lines, although the fact that none of them managed to stick in my mind is maybe not such a good sign, and the ongoing dynamic with boy-Paddy-punched-in-a-club, who thinks the Four Spods are mafia kingpins for a reason that isn’t really clear, is quite good fun. Jon Turtletaub is good at group dynamics, when he’s good at anything (remember Cool Runnings?), and with actors of this calibre he just needs to point them in the right direction. Forty per cent more energetic than Quartet, five per cent funnier than The Best Exotic Marigold Hotel and quite a lot less touching than either, you’ll probably struggle to feel strongly about Last Vegas – it’s as if someone set out to make a Frat Pack comedy that could be shown between Loose Women and Countdown.

Previous: The Jewish Cardinal
Next: Richard Gere could star in The Best Exotic Marigold Hotel 2