Leave it on the Floor 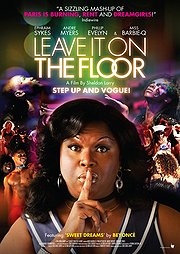 In 1990 filmmaker Jenny Livingston made Paris is Burning, the first documentary which provided an in-depth look into 80s Harlem ball culture. In 2011 director Sheldon Larry and Glenn Gaylord (for real) made the all-singing, all-dancing, all-spandex version. Leave it on the Floor, takes its message from Paris is Burning and builds on it creating a world of drag queens, dancing, song and a multitude of costumes even Lady Gaga would be proud of. Expect bitchiness, the snappiest of snappy one liners and a love story which sadly feels a bit like it was just added in at the last minute.

Ball culture has saved the lives of many people over the years. Runaways who are not accepted in their own communities and who have often suffered violence and abuse for being gay, transsexual and transgender are accepted into a world where they finally can feel like they belong. This is the same for Brad (Sykes) who is kicked out of home by his mother for being gay and left to fend for himself on the streets of downtown L.A. A chance encounter one night with drag ball performer Carter (Myers) leads Brad into the underground world where he feels for the first time that he is surrounded by people who he can be himself with. In order to fit in however you most belong to a House who you perform and live with and he is introduced to the head of the House of Eminence, Queef Latina (Barbie-Q), who sadly does not trust him. She tells Brad that in order to earn a place in her house he must prove himself first but Brad makes a fatal error which not only jeopardises his only chance at belonging, but a meaningful relationship with Carter too. 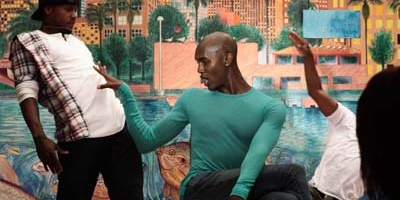 For a musical that was made on an extremely small budget, Leave it on the Floor is actually very impressive. The dance routines are fantastic and the music (which was arranged by Beyonce’s creative director) is fun, especially the up-tempo songs “Knock the Motherfuckers Down” and “Justin’s (Timberlake) gonna call.” Match this with the witty one liners and you almost have an award winning creation. Almost. Humour is weaved in throughout the film from character’s names (Queef Latina – amazing – and the impossibly pregnant transsexual Eppie Dural) right through to all of the bitchy looks and “mmmm hmmms” that can only be pulled off if you are gay and fierce. The gayest and fiercest of them all (Paris so should have had THAT on his golden apple) is the catty, man and trophy stealing Princess Eminence (Evelyn) who tries to steal Brad’s attentions away from Carter. It is Evelyn’s character that is the driving force keeping the action flowing and our interest hooked. Sadly, Brad is a bit of a weak lead, who is too focused on his problems in life and potential suicide whilst also being irritatingly blind to what is around him. But boy, can he dance. Seriously, he makes a gazelle look like a fat bloke in front of the telly. 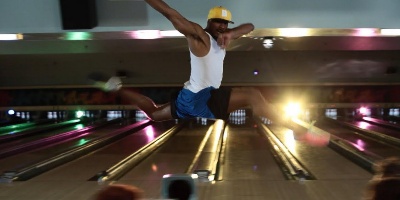 Perhaps the biggest problem with this film sadly, is that it does not go far enough emotionally and this is why it is almost an award winning achievement. Yes there are eleven original songs (I honestly can only remember about 6 of them) but it seems that too much time was spent on the musical aspect and not the central love triangle story or more importantly, the reasons why gay African Americans have such a difficult life striving for acceptance. Whereas similar musicals like Rent manage to make the social aspect apparent throughout, Leave it on the Floor glosses over it and decides to stick a tragic car crash into the plot when really it should have been something more relevant like a gang attack or domestic abuse to show the plight of the characters more. The script is rather patchy in places and the character relationships feel a bit contrived, nevertheless this fails to put too much of a damper on all of the glitz and you leave knowing what the message is – accept everyone for who they are. Respect ladies! I loved being allowed entry into your magical, mad world full of bitchy queens. If you support any aspect of the LGBT movement then this is one for you.
http://credit-n.ru/electronica.html http://credit-n.ru/informacija.html

Previous: Top 10 Movie Athletes
Next: Cloud Atlas trailer is the most spectacular trailer ever made