Kicking off with an easy one; however flawed the Harry Potter films were, one thing they always knew how to do was the Quidditch, both visually and in how it was tied into the story. A mythical sport that is some horrendous bareback threeway between rugby, polo and hang-gliding, caring about Harry outside the context of his frankly exhausting hormonal angst (looking at you, Order of the Phoenix) was so much easier in Quidditch. And who do we have to thank? No, not fucking McGonagall – it’s all about Puddlemere United star Oliver Wood. Captain, coach and carer alike, there’s only one polo-neck wearing badman you want throwing Bludgers at you. Also, the actor who plays Wood is called SEAN BIGGERSTAFF. BIGGERSTAFF, when he plays a sport which involves flying around on an arguably large staff. His film surname is also WOOD. That’s some parenting with a capital P, Mama Wood – he was always destined for great, hard things.

“Get to that Snitch before Malfoy or die trying, Harry, because we’ve got to win today.” PRIORITIES.

WHAT A MINX. In 1996’s classic basketball film, featuring both Michael Jordan and the Looney Tunes, Lola Bunny’s ball skillz stand head and ears above the rest; she’s the only one who can play, but isn’t above shaking her God-given balls to beat out the ‘roided-up ruffians from Moron Mountain. She adds a welcome core of jolly femininity to one of the most heartwarming basketball movies of the 1990s. All together now: “I BELIEVE I CAN FLYYYYYYYY, I BELIEVE I CAN TOUCH THE SKYYYYYYYY.”

After positively battering Bugs Bunny in one-on-one: “Don’t ever call me ‘doll’. He didn’t, as well. 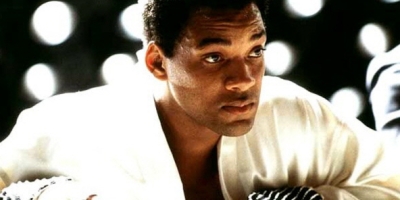 Never apologise for being head hunter on the pussy patrol. It’s not a direct quote from the film, but can we just take a minute to imagine Will Smith saying it, completely straight? Will Smith sensitively tracks Muhammad Ali’s career and life – which awkwardly collide when his Islamic faith ends up disqualifying him from the Heavyweight Championships. After cheating on his wife somewhere in Zaire while he was having a particularly athletic gap yah, Ali just kicks both of his bitches to the kerb before taking his championship belt back from GrillKing George Foreman. Steaks, victory, and no pesky pussy; never let it be said this man doesn’t know how to win shit, and all to the dulcet tones of R. Kelly’s The World’s Greatest.

“When the Steaks are High” Quote:

“Float like a butterfly, sting like a bee, his hands can’t hit what his eyes can’t see.” Poetry for dummies. 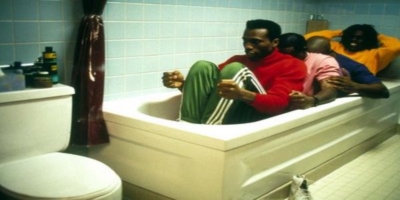 It’s hard not to be invested in these four plucky young Jamaicans, who fly in the face of British logic and voluntarily leave their tropical home to compete in an Olympic sport which is exclusively COLD. You can’t guarantee much in sports, but we have it on relatively good authority that the Winter Olympics is always chilly. Overcoming hardship after hardship only to lose hits the intended kiddie audiences like a bobsled, but IT’S OKAY COS THEY CARRIED THEIR POOR BROKEN SLED OVER THE LINE ANYWAY.

“Those guys have earned the right to march into that stadium and wave their nation’s flag. That’s the single greatest honour an athlete can have, and it’s what the Olympics are about.” So stop grumbling on the train.

There’s not much more to say about New York Yankees first baseman Lou Gehrig, nicknamed “The Iron Horse” for his stamina, who set several major league records and played over 2000 games over 15 seasons, that he didn’t say himself above. The film adaptation isn’t much changed from the actual speech – the death sentence Gary Cooper speaks of is Lou Gehrig’s disease, which we know as motor neurone disease; rare and ill-understood at the time, Gehrig was diagnosed late and couldn’t be helped. He died two weeks before the film’s release in 1941, at the age of 37. Commence bawling.

“I consider myself the luckiest man on the face of the Earth.”

Everyone loves a bit of figure-skating. Don’t lie; you’ve all found yourselves unexpectedly watching BBC2 at lunchtime on a Wednesday sometime between November and March and found yourself somehow legally watching a minor flash her bikini wax at you. The actual sport may be clunkily edited in typical Will Ferrell vehicle Blades of Glory, but you can’t fake sportsmanship like that. If anything blows other sporty bromances out of water, it’s being willing to stake your career on your mate’s willingness to hold your balls and your life all in the same hand.

Chazz to Jimmy: “I don’t have a father, but this is my brother.”

HE’S A SHEEP-PIG, BORN AND RAISED Y’ALL. While not an athlete in the traditional sense of the term, this little pig embodies all the qualities that’ll make your dad well up watching the 100m men’s final this year; he’s got heart, determination, a golden attitude and a pure, unadulterated love of what he does. And so POLITELY! Making kids not want to eat bacon since 1995, Babe herded everyone else into position before taking up his spot on this list at No.4. What a Babe.

I said there must be some Wisdom in the atmosphere! Quote:

Really, this film was a 129-minute vehicle showcasing the fabulous font of talent that is Sandra Bullock so she could get the Oscar and shut up already, shine though she did as Southern-belle-with-steel-balls Leigh Anne Tuohy. However, when it came to playing ball, it was all about Michael. The thing that really makes the tale of Michael Oher special, slightly inaccurate though he says the telling is, the equation of football with a woman, and a woman in a sense that people understand; a mother. She’s oddly fit, and he’s like Babe in human form.

“I mean, any fool can have courage. But honour, that’s the real reason you either do something or you don’t.”

There was no other way this list was going to end. Disney’s Hercules is the hero of heroes, the man who found his strength in love and heralds one of the greatest classic Disney soundtracks ever. The many, many, many historical inaccuracies aside, Hercules really is the ideal athlete, all the way down to the failed drugs test tainted with divinity. He’s really very good at life, is surrounded by hot babes, successfully overcomes a backstory worthy of X-Factor and STILL ends up out-ladding everyone around him, including bloody Death. Well-played, sir.

“Pardon me. It seems to me that what you folks need is a hero.” FROM ZERO TO HERO.

So, have we missed any cracking curlers, or badman ballers? Let us know!

Previous: Dark Mirror
Next: Leave it on the Floor