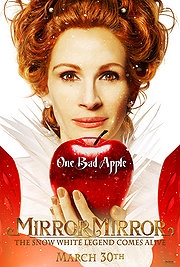 Meet Snow White (Collins); she’s a very pretty, but painfully shy eighteen year old girl, and lives in a palace with her – for want of a better word – “wicked” stepmother (Roberts). Sound familiar yet?

So, the Queen is ruling the kingdom after Snow’s father was eaten by a mysterious beast that prowls the bordering forest. And she’s, like, really bad at it; after frittering away every last cent of the royal treasury in order to fund her expensive beauty treatments, huge dresses and life-size games of Battleship, Queenie needs a rich hubby, and stat! She needs a partially-nude, extraordinarily wealthy and, above all, handsome prince, doesn’t she? Snow eventually encounters the inevitable Prince Charming (Hammer) on a forbidden stroll through the forest. She also notices that her royal subjects are living in poverty, thanks to the Queen’s heavy taxes, and decides to stage a revolution. Revolution fails, Julia Roberts gets pissy, Nathan Lane is ordered to murder the rebellious teen and, somehow, Snow ends up living in the woods with seven Robin Hood-esque thieves. Who are also dwarves. Julia Roberts figures this out with her magical mirror-meets-portal-to-another-dimension (the other dimension consists of a shed containing ANOTHER mirror containing ANOTHER Julia Roberts) and seeks to wreak her revenge…

Mirror Mirror is great for children; I can’t stress that point enough. I sat in a cinema surrounded by the little demons and they absolutely loved Mirror Mirror, getting especially excited about the inexplicable Bollywood-style song and dance number. But what do kids know, eh? They voted ADAM SANDLER as the BEST Movie Actor. Based on his dual performance in Jack & Jill. Therefore, the opinions of children are worth absolutely nothing in the world of good cinema. They’d probably enjoy watching a dog piss against a lampost if there was a bucket of popcorn in it for them. Adults, on the other hand, will not be entirely repelled by Mirror Mirror. It certainly has a small degree of charm; Nathan Lane provides the funny, as normal, and the costumes and sumptuous set designs are absolutely fit for a fairytale. The animation sequence at the beginning also comes as a welcome surprise (despite being suspiciously similar to the shadow-puppet sequence in Harry Potter And The Deathly Hallows: Part 1) but is, on the whole, very lovely to look at.

Julia Roberts gives a stellar performance with the little material she has at her disposal but, on short, the problem with her character is that the Queen is utterly two dimensional. She is guilty of extreme vanity and greed, but, other than that, isn’t all that evil. Her reason for hating Snow White isn’t anything to do with the child’s beauty overshadowing her own, as the original fairytale suggests, but (rather blandly) because the teen disapproves of her taxing techniques. BUT THAT’S ALL WRONG, ISN’T IT TARSEM SINGH?! The whole point of Grimm’s Snow White is to show how terrifying the adult populace find the growing power of the younger generations. How age is the most frightening demon we have to face. How the unheimlich (or the unnatural) can seep into our everyday lives and make us fear the strange… like the replacement mother, or stepmother, for example.

In short, it fails to live up to the structure of the original (far more compelling) tale. True love’s first kiss loses all of its power, the once-terrifying Other Mother is merely a grumpy middle-aged woman and the “happily ever after” sequence feels completely undeserved for any of the characters involved. By stripping the story of all of the unsavoury and darker elements, in a bid to create the perfect family film, Tarsem Singh has served up something bland, something obvious and, as a whole, wildly nonsensical. If you would like to see something mildly entertaining, then, by all means, head off to the cinemas at once to see Mirror Mirror. But if you want the true passion, sexual jealousy and terror of the original tale, we suggest you stick to Disney’s 1937 animation; the underlying darkness of that family favourite remains completely untouched by this simpering rival.

Will you be going to see Mirror Mirror this week? Why?

Previous: The Top 5 Films That Aren’t As Clever As We Think They Are
Next: First Look At ‘To Rome With Love’