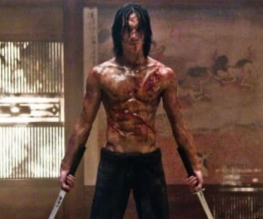 Here’s a universal truth: The Wachowski Brothers used to be cool. Back in the heady days of 1999, when Livin’ La Vida Loca infested the airwaves we all feared for our lives that the Y2K bug would make computers sentient and throttle us with their IDU cables, we were all watching The Matrix. And we loved it! ‘Cause it was awesome! Jeez, the film even makes Keanu Reeves look cool. That’s pretty much the modern equivalent of water into wine.

And then… well, it all went horribly wrong. Two bloated, nonsensical sequels that alienated even the most hardcore fans, an utter butchery of Alan Moore’s sublime V For Vendetta, which took the best parts of the comic and drew comedy dongs all over it, and Speed Racer, which had less impact on cinema screens than the breath of the back row audience. If they wanted to become this criminally reviled by the public, why didn’t they just backhand a bunny rabbit on the news, or something?

Anyway, next up on their (s)hit list is Ninja Assassin. It’s the story of Raizo (Jeong Ji-hoon, AKA Rain), a ninja, who’s an assassin, and he gets in loads of fights. Oh, there’s some narrative fluff in the background, naturally; a cute kunoichi (that’s a female ninja, folks) tries to escape her brutal training and is offed, and there’s a couple of Europol agents (Naoimi Harris and Ben Miles, two talents totally wasted here) tracking down said Ninja’s taskmasters, who have their rather shady fingers in some rather shady pies.

Seeing as the Wachowskis pretty much based this entire film on the fact they were marginally impressed by Rain’s appearance in Speed Racer – and that the script was apparently written in a 54-hour scribbling marathon by J. Michael Strczynski, who really should know better – you can guess what the result is. This is pretty empty entertainment, even in terms of chopsocky action. The direction’s swift and visually gruelling. There’s lots of gore and the camera movements are likely to leave audience members queasy, and while the choreography’s deft, it’s neither original nor particularly exciting. The plot’s muddled and baffling, skipping from scene to scene with n’ary a thought, more interested in getting to the next repetitive fight scene than it is with strengthening – or even vaguely skimming over – the characters.

In terms of acting, Naomi Harris (easily the best thing in this) tries her hardest with what she’s been given, but it’s an uphill struggle that she ultimately loses, which is a shame. That’s nothing, however, compared to the charisma vacuum that is Rain, easily the least engaging actor we’ve seen for quite some time. He strives for machismo, attempting to convey a tortured inner soul, but his flimsy delivery and clear lack of belief in the film as a whole shows everyone up. Even in terms of brainless entertainment this sorry mess is particularly brainless, coming across as dull, uninspired and clichéd nonsense that even ninja fans will resent. With any luck, this car crash will be the final nail in the Wachowskis’ torturous downward spiral of a career.

Ninja Assassin, or just Ninja Ass? We’d be interested to see if anyone’s got anything positive to say about this film; quite frankly, it only gets the half star ’cause the camera was pointed in the right direction when they were filming.

Previous: The Boys Are Back
Next: Deja vu at the SAG Awards