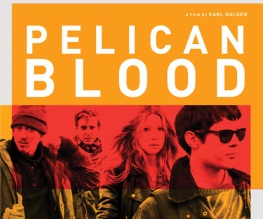 The pelican is a symbol of self-sacrifice; the legend is that the pelican it will feed its children with its own blood if there no other food is available, and pelicans are the only animals to sacrifice themselves for the good of others. Pelican Blood weaves in this theme in a film about suicide, bird-watching and love, which should only be watched if you yourself don’t have any suicidal leanings, cos it ain’t exactly rainbows and sunshine.

“Birdwatchers make a lot of lists,” protagonist Nikko (Treadaway) tells us. And Nikko, an obsessive birdwatcher whose day job as a cleaner is the perfect outlet for his OCD tendencies, plans to kill himself once his list of birds spotted reaches 500. We learn that Nikko has just been released from psychotherapy after a botched wrist-slashing job in which he almost (accidentally) killed his sister when she tried to stop him. Into this psychological mess waltzes his ex-girlfriend Stevie (Booth), an Australian nut job Nikko met on a suicide website and who recently disappeared off to South America – which may or may not be the reason he tried to slice open his arms. He certainly has an unhealthy attachment to Stevie, and it is unclear whether her return will save him from himself or tip him back over the edge. With such dark themes as suicide to play around with, you need some decent acting talent to avoid the curse of the GCSE drama production. Thankfully, Treadaway steps up to the mark, and while he plays kooky, he never overbalances under the weight of what is required. Booth does a good job as Stevie, as long as the aim was to create a leading character so dislikeable that you wish she’d bugger back off to South America. She’s an aggressive, self-righteous animal rights activist who gets her kicks from pelting her opposition with paint bombs, sticks or stones and appears to care nothing for Nikko’s peace of mind, defining their relationship on her current whim. Perversely, for someone with a death wish, she is vital and passionate, though simultaneously self-absorbed and brattish. It is a struggle to empathise with Nikko’s adoration of her, while at the same time understanding, as co-conspirators of their own demise, the identity and sympathy she offers his troubled mind. Director Karl Golden echoes the characters’ bleak outlook on life with equally bleak shots of cloud-laden London and the English countryside, followed by some nice – if not exactly subtle – pathetic fallacy in his closing shot. Pelican Blood is not easy to pin down; depressing and offbeat, well put-together but an uncomfortable watch, Golden does his best to step outside the norm. I can’t say it’s good propaganda for birdwatching as a hobby, though there’s an edge of danger present that you wouldn’t normally associate with twitchers. It’s a terribly downbeat film that could have made more of the issues at hand, but Pelican Blood is nicely constructed while Golden has a lot of potential in the indie film arena.

Previous: Faster
Next: Five Movie Matriarchs and What To Get Them This Mother’s Day