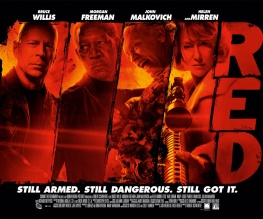 I have been excited about Red for bloody MONTHS. I’ve rammed the trailers down my flatmates’ throats, ended all conversations about The Expendables with “Of course, Red will blow it out of the water” and speculated endlessly about Morgan Freeman’s powder-blue fatigues. I’ve invested a lot of hope in what promised to be an ensemble action comedy like no other. And in a way, it was. Now that Red exists, no other director can ever again hope to take such an all-star cast and spend two hours gradually making an audience hate them.

Frank Moses (Willis) is a genial retiree who apparently spends his days tearing up his pension cheques so he has an excuse to call Sarah (Parker), the cheerful functionary who posts them to him. The high point of his day seems to be checking to see if his pet avocado has grown a new leaf… until he goes for a midnight wee and finds himself the target of a CIA assassination attempt. After dispatching his attackers with insolent ease, Frank (who, by the way, is an ex-Black Ops agent with a Langley file three inches thick) goes about assembling his old special forces team to find out exactly which of his shady missions has put them all on a covert hit list.

Octogenarian Joe (Freeman), acid-addled conspiracy theorist Marvin (Malkovich) and ex-MI6 assassin Victoria (Mirren) hit the road with Frank and his initially reluctant sidekick Sarah, who goes from gloomy hostage to gleeful seditionist in an improbably short space of time. As it becomes clear that other ex-agents are being killed off, it’s up to Frank to reach into the darkest corners of the intelligence community and fiddle with knobs that nobody else even knows are there in his quest to find out just who has the clout to use the CIA as a private hit squad. Still, it’s better than sitting at home complaining about the ambient temperature and battling with a dodgy catheter.

On the surface, the very least we should have been able to expect from Red was an absurdly over-the-top action comedy along the lines of The A-Team, which we gave three stars for its sheer fun factor. Unfortunately, Red just fails to deliver. It has individual scenes which are cracking, mostly the ones which revolve around John Malkovich’s hilariously monged space cadet character, but there’s just not enough to tie the film together or justify the absurd action sequences in which Bruce Willis kicks every ass in Kansas City to distract you from his very obvious facelift. Every single part is hopelessly underwritten, Brian Cox’s delicious-on-paper supporting role is wasted on a cheap accent and a crap beard, and the explosions happen so frequently that they soon stop being exciting, scary or even noteworthy – they’re the pyrotechnic equivalent of stabbings in Hackney.

To replicate the Red viewing experience (because Christ knows you don’t actually want to go and see it), imagine the lead cast suffocating in a grain silo of rejected scripts for Johnny English 4 and Die Hard 12. For two hours. Not only that, but as they piss themselves and claw at the rusty corrugated iron edge of the silo, hopelessly debasing themselves in an attempt to escape, a shit director whose greatest achievement to date is the frankly abhorrent The Time Traveler’s Wife hits them in the face with their own hard-won Academy Awards. They’re recognisably the actors you’ve loved in some of your favourite films, but there’s nothing you can do to help them and you desperately wish you hadn’t had to see them in such a compromising position. You’re a little bit disgusted; and although you’ll convince yourself that dull ache in your stomach is just pity, you know you won’t ever feel quite the same way about them again.

Previous: Burke and Hare
Next: Guy Fawkes Movies: 5 films we demand to see