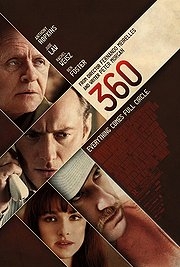 Arthur Schnitzler wrote a play in 1897 which shocked his society. It suggested that despite religious doctrine and strict laws of society, sex between the classes was rife. The whore sleeps with the soldier, who sleeps with the parlour maid until eventually the Count sleeps with the whore and the whole thing comes full circle again. Shocking stuff, eh? Variants of the play have been filmed and staged over the last hundred years including the famous ‘pure theatrical Viagra’ performance where Nicole Kidman stripped on stage. Is 360 as steamy as that? Absolutely not. Sadly it is less like Viagra and more like a herbal love enhancer you can buy in Ann Summers. 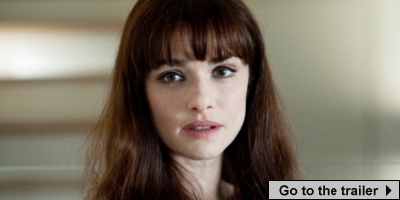 This is a long one to explain, so deep breath and here we go. Beginning in Vienna where Schnitzler’s original play was set, we first meet Mirka (Lucia Siposová) a Slovakian prostitute waiting for British businessman Michael (Law) who hired her but backs out of the liaison. Meanwhile back at home in London, Michael’s wife Rose (Weisz) is sleeping with her Brazilian photographer toyboy. This sets off a chain of lover’s stories across continents including a Muslim man struggling with his passion for a married woman in Paris, a sex offender (Ben Foster) in Colorado who is being released from jail and a young woman called Laura (Maria Flor) who meets John (Hopkins), a man searching for his missing daughter in the US. Eventually all the threads meet and we come right back 360 degrees to where we started.

The main problem with 360 is that it tries to do too much in too short a space of time. Having said that, the film clocks in at nearly two hours and spending more time with the hollow characters might have been more than one person could bear. It all starts promisingly enough with great performances and enough intrigue to hook your attention. Sadly there is just a massive amount of zipping around the world giving you fifteen minutes with each story before heading off to another location, never tying up the ends properly. After the failed attempt to meet with Mirka, Law’s character is then blackmailed by his potential work partner. We never see anything more of this story until the film’s slapdash final montage. Similarly we don’t see what happens to Weisz’s boyfriend, Hopkins’ daughter or Tyler the sex offender. Instead of going for an Amores Perros/21 Grams style film where three or so characters are looked at in depth, Meirelles choose quantity over quality leaving us feeling unsatisfied with the film overall. 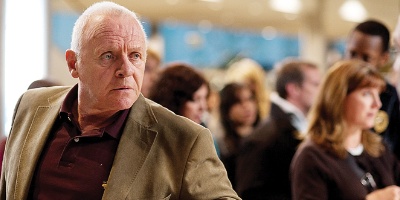 Meirelles employs an irritating spit screen style of presentation in 360 which greatly reduces the impact of Adriano Goldman’s beautiful cinematography. At moments it works, where at one point when Jude Law is being blackmailed for hiring a prostitute we see a shot of Mirka going home on the bus, sandwiched in between Law and the blackmailer showing how she is in the middle of it all being screwed over by so many different men. Other than this though it shoves its imagery and juxtapositions at you so hard you are nearly knocked backwards.

Some of the performances are terrific. Weisz delivers a beautifully delicate portrayal of a woman torn between passion and love, but it is Anthony Hopkins who steals the show with a speech at a support group which drama students around the world will undoubtedly use for their final showcases. Ultimately the quality of the acting is ruined by the vacuous writing which prattles on about forks in the road of life like a below par Robert Frost poem. Tyler the sex offender’s story is also so large that fifteen minutes of screen time just won’t make do and I would have happily watched a whole film about Laura, Tyler and John on their own. As it is, it feels like they have just added in the sex offender plot line to add some controversy to the story. To be honest the stories in 360 could all be broken down into groups of three and they would have worked better. There is a reason why three is the magic number after all. 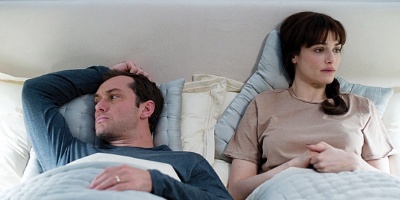 Bizarrely despite all of this, I actually found myself enjoying aspects of 360 and liked seeing how the interconnecting plots would all come together. I just wish they had done it slightly better. Whilst La Ronde shook up a society don’t expect 360 to reinvent the wheel. It is a real shame, as Hopkins could definitely have been up for an Academy Award if everything else around him wasn’t so poor. http://credit-n.ru/zaymi-online-blog-single.html http://credit-n.ru/offers-zaim/otlnal-microzaimi.html