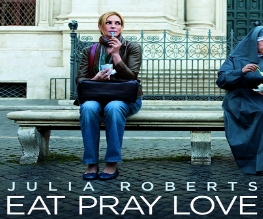 You might think that Liz Gilbert (Roberts) had it all. And you wouldn’t be shot for thinking so. She’s a good-looking writer, and she lives in a nice house with her husband (Crudup). But as with most people who have everything, she is unsatisfied and wants more. She wants to see stuff. Then OPEN YOUR EYES! Or go sight-seeing. However, it seems that Liz is at that mid-life crisis age when she feels like the squirrel who played all summer, rather than gather acorns for the winter like her pals. Deep. So, she goes out and gets her some acorns! Specifically, acorns in the shape of a hot, spiritual toyboy (Franco) who is starring in a play she wrote. A nice nut, but it doesn’t work out. So, instead of trading him in for a younger model as a proper mid-life crisis victim would, she decides to up-sticks, pack away her life in a storage unit and plan a year long trip to Italy, India and Bali. To eat, pray and love. Although it takes a good 45 minutes before she does any of those.

Time flies when you’re having fun? This is the exception

This time thing really gets my goat – Flava Flav would turn in his grave, if he wasn’t still alive. The whole film runs for almost two and half hours and feels longer. Don’t get me wrong, I like long films – Avatar kept me excited and time flew when watching Titanic, but this film was so dull I gave myself a repetitive strain injury from my regular watch-glancing action. But time in the film moved SO FAST! Mind-messing. One minute, Liz is married, then woah, she’s not, then she’s making eyes at the actor in her play, then fast forward, they’re living together and talking about gurus.

We get the impression Liz is on the rebound, looking for a bit of fun with a hot young stud, but no! Suddenly she’s in love, and then flash, bang – it’s over. And thanks to some lazy scripting, whilst time moves slowly in the cinema and you feel your life slipping away, Liz’s life is being rushed on screen. But, if the producers were in such a hurry to move the plot along, why does it take forever? Most people could eat, pray and love in about ten minutes. I don’t want to show off, but I could probably do a sudoku and paint my toenails into the bargain.

“I’m having a relationship with my pizza”

Then again, our mate Liz doesn’t really seem up to doing much. In India she hangs out at the ashram, in Bali she meditates for ages and in Italy, all she does is eat and learn a bit of Italian. Watch out for this section and eat before you go. In the same way as the Marks and Spencer adverts make food look so darn sexy, there are many loving close-ups on the meals Roberts eats; I almost walked out from a mixture of boredom and hunger. Plus, the whole Italian bit is peppered with stereotypes from “Giovanni” the sexy language tutor to the fact that there are couples snogging around every which way, because apparently that’s well Italian, innit.

Generally speaking, I judge a film on what feelings I come away with, and no feelings are worse than bad feelings. Eat Pray Love gave me feelings alright – mainly hunger and envy. If you must see it, eat before you go and don’t get jealous of the places Liz visits because she’s going for all the wrong reasons. Perhaps the only thing that could have redeemed this film was if the female protagonist, after leaving her husband, learnt to be herself by herself and make some life changes. Instead she just runs into the arms of another. One big, sloppy circle; it reminded me of The Human Centipede.

Previous: Texas Chainsaw Massacre greatest horror
Next: Back to the Future – popping the time bubble