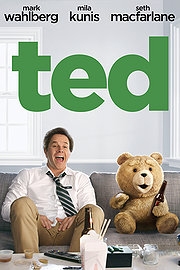 We have all made wishes in life. We blow out the candles on birthday cakes, throw eyelashes about the place and help dandelions to seed themselves in people’s lawns. We also wish harder than anything that we will win the Euromillions rollover. However in Ted there are some wishes that do come true. Lonely little boys on Christmas day can wish for their teddy bears to come alive and be their best friend forever. Whilst we would still rather have the Euromillions, Seth MacFarlane does make this seem like fun. The only problem is you need to get rid of your annoying girlfriend first to enjoy it.

Seth MacFarlane seems to be a bit of a Jack of all trades. Writing, Producing, Peter Griffining and now directing a first feature film in which he voices the lead role. Ted is about John (Wahlberg), who as a boy made a wish on Christmas eve that his bear called Teddy (MacFarlane) would come alive. His wish is granted and they promise each other that they will stay together forever. Over the years Ted gains much notoriety and becomes a teddy celebrity (or a tedlebrity if you would) on TV talk shows before slowly beginning the sorry descent from fame to loserville. Right beside him every step of the way is John who is now a thirty-something deadbeat working in a car rental dealership in Boston, whose life has been hindered by having a teddy for a best friend. He does however have a beautiful girlfriend, Lori (Kunis) who he has been with for four years. Lori is starting to grow tired of Ted and John’s juvenile, dope-smoking behavior and gives him an ultimatum- ask Ted to move out or lose her for good. Essentially the premise for Ted is very good, however it is a shame that instead of focusing on the humour, MacFarlane forces in a cute and slightly overdrawn buddy-comedy bromance which leaves Kunis’ character out in the cold. Ted and John have a blast whenever they are together and all of the scenes with the two of them are the most fun to watch. You begin to wonder though why John would give up all of the fun he and Ted have just so he can attend boring work parties with a girl who is the poor man’s version of Emma Stone. This is an inherent problem with the film, where Ted’s drugged-up, free-sex world starts looking more and more like a place you would rather hang out then be with the one you supposedly love. It is hard for Kunis, the script gives her nothing to work with, especially as Ted steals all of the best lines in the film. Very early on though you begin to start willing John to ditch the broad so he can hang out with his buddy and live happily ever after. Ted has some really great moments right from the very start, including a brilliant storybook-esque voice over (provided by Patrick Stewart) and a lot of fun childish imaginings that John has when he meets his childhood hero, Flash (a-ah) Gordon. Mark Walhberg does a fantastic job acting against a character who isn’t even there and the relationship between him and Ted does have some tearjerker moments. The problem is it just wasn’t as funny as I imagined it would be. The jokes seem to have no oomph behind them and even by MacFarlane’s standards the humour is pretty tame. It also raises some strange questions like…how do teddies have sex, and why does Ted sound just like Peter Griffin? It is probably best not to dwell on it too much though…

Ted feels more like a mishmash of plot points and famous people that MacFarlane has called in favours from rather than a fully formed movie. There is one wonderfully random cameo though. Blink twice and you’ll miss him so keep your eyes wide open like a teddy bear… Ted is a very enjoyable film. It was more schmaltzy than I was expecting it to be and could have done with more belly laughs but overall it made for a fun if forgettable viewing experience. Remember, lovers come and go but your teddy will be with you forever.