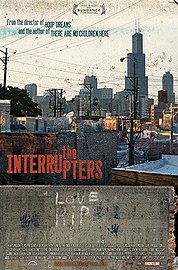 From the second we’re welcomed into their strange world our three leads Ameena, Cobe and Eddie provide a charismatic centre to an often-disorientating film; their personal narratives consistently preventing The Interrupters from sliding into familiar tropes of gang violence. The film threads interviews with the interrupters through scenes of their work on the streets. So what exactly is it these Interrupters do? Thankfully, it isn’t long before we see them in action.

An early scene shows Ameena physically stepping into the middle of a confrontation between two youths; pulling one of its perpetrators aside, calming him down, and driving him away from the scene. It is a scenario we might recognise from Hollywood, but involving none of the glamour. Ameena’s matronly intervention instead reveals the relative youth of those involved – and it soon becomes evident that this instance of adolescent, almost childish anger is not isolated. Indeed, we learn that Ameena was once a drug ring enforcer, that Cobe was in and out of prison from an early age, and that Eddie murdered someone at the age of 17. Perhaps because of these histories, they are forthcoming about their ambivalent position with regard to the criminality of gangs. This ambivalence works thematically on two levels: firstly, it avoids easy moralisations on complex issues of deprivation. Secondly, it successfully highlights the way in which gangs function as extensions of and replacements for the family structure. A strong theme throughout, the film shows the pain of parents who have lost children, deals honestly with the failure of families to provide stability and protection for their young, and stresses the importance of community in teaching the new generation about strategies of non-violence. It’s a long film: the two hours pass slowly at several points. The trust of the director and producer in their subjects is clear, but this sometimes prevents deeper questioning of individual motives. Their objective – to showcase all the information available – is at odds with their evident desire for a positive ending, and this makes for slightly murky investigating. It comes across as a film with a great deal of heart, but not quite the same level of interrogation. Perhaps such interrogation is not necessary in a documentary that wishes to inform its audience rather than to challenge its subjects, but it would have been satisfying to see this characters explored in an atmosphere that came across as thoroughly unbiased.

There’s no denying the striking relevance of The Interrupters for those watching it amidst England’s riots, and one can’t help but exit the cinema hoping that perhaps, in the coming weeks, we will see more intervention on our own streets as opposed to ever-increasing tension between the state and its denouncers. There is much to be learned from this film, perhaps most crucially the social importance of ongoing communication with those who seem most fearsome, and most remote.