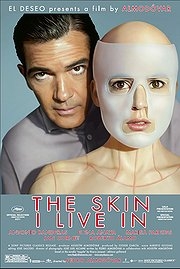 Pedro Almodóvar’s new film The Skin I Live In, which premieres tonight at the Film4 Summer Screen in London, has been eagerly awaited for several reasons. It marks a reunion between Almodóvar and his one-time muse Antonio Banderas, whose wildly successful career can be traced back to a number of early roles (including his first film performance) in films like Labyrinth of Passion. It is more or less the first time Almodóvar has seriously engaged with science fiction. And, quite simply, it’s another new film from one of Europe’s foremost living directors. What more could you want?

The Skin I Live In begins in 2012 Toledo. Robert Ledgard (Banderas) is a brilliant and outwardly respectable plastic surgeon who is first seen describing his development of an artificial human skin which is resistant to burns and insect bites (and therefore, malaria). His project has been dubbed ‘Gal’, after his first wife, who, Ledgard tells a colleague, died as a result of car crash burns. So far, so philanthropic…

We also meet Vera (Anaya), a flawlessly beautiful young woman who is kept against her will in a room of Ledgard’s house. The relationship between Vera and Ledgard is an unknown, as is how she ended up his prisoner. However, it is soon revealed that it is on Vera whom the plastic surgeon has been carrying out his experiments for this artificial, perfect skin, breaching the bioethical line so totally that it is naught but a dot in the distance. The tangled threads of the protagonists’ relationship, Vera’s identity and Ledgard’s history, which slowly unravel over the length of the film, create a dark, unsettling and brilliant story and reveal an amoral genius totally consumed by his science. While there is indeed a ‘big twist’ and so I don’t want to reveal too much about the plot, as with any great film the destination is not as important as the journey. Almodóvar’s pacing is masterful, never hurried but each moment reeling you in further. He has been criticized before for not flinching from uncomfortable scenes, but each one is a necessary brushstroke on the canvas of story and character; he frames each scene as carefully as the Old Masters which hang on the walls of Ledgard’s house. These paintings in turn draw analogies between the glorification of the female form in Renaissance art, and the plastic surgeon as a modern artist painting over imperfections. Vera is even framed within a CCTV screen in a near-identical pose to Titian’s Venus of Urbino, which hangs on the landing.

Almodóvar raises some serious – and timely – questions about the ethics of science and genetics. Despite Ledgard’s speech about the human benefit of his research, you come to realise that is not his aim; his work is driven by an ultimately selfish obsession to achieve artistic perfection. His talent and his money means his reality is not the same as ours – this is a man playing at God, ruling over an almost hermetic world. His cold, clinical nature is reflected by the stark, clean lines of the laboratory, operating theatre and Vera’s room – apart from his housekeeper Mirilia’s kitchen, there is no warmth anywhere in his house. Despite Ledgard’s outward displays of pain, you don’t feel you ever see true sympathetic emotion. His obsession to protect the women in his life seems more like an obsession with keeping precious objects under lock and key, and the similarity between Vera and his dead wife is no coincidence. As a modern Victor Frankenstein he attempts to blend art and science to create a perfection he can possess, but his ambition is trumped by the flawed, messy business of being human.

In a time when we are more obsessed than ever with image, Almodóvar has created a beautiful, intensely disturbing film which will make even the shallowest audiences stop and think. How much of who we are depends on how we appear to others, or even ourselves? Why should we not use all the science available to improve our race? When does self-improvement, mere ‘touching up’, become morally questionable? And who, in this film, holds the power – man or woman, creator or created, God or Eve or Adam? Almodóvar should not be easy watching, but his film is totally enthralling; intelligent and, even when ugly, visually gorgeous. The acting is don’t-even-notice-it superb and the entire offering is enormously satisfying despite its twisted and divisive subject (which certainly won’t be everyone’s cup of tea). Even so, go, and admire a New Master at work. http://credit-n.ru/forex.html http://credit-n.ru/blog-single-tg.html