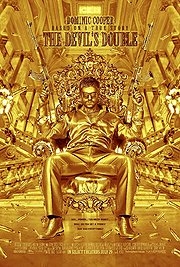 Director Lee Tamahori seems to have approached the biopic of Latif Yahia, the body double of Uday Hussein, in much the same way he did Die Another Day: keep ’em entertained, keep the soundtrack loud and the rest will take care of itself. It might seem an odd way to approach the life story of a man who witnessed countless rapes, murders and other unfathomable atrocities committed by Saddam Hussein’s eldest son, but oddly enough, it works. Arrogant, ambitious, loud and excessive, Tamahori isn’t here to give us the facts, he’s here to race us – stereo blaring and blood flowing – through the style.

It’s actually a rather ballsy move, one that almost matches the cojonies it must have taken to cast relatively green actor Dominic Cooper as both Uday and Latif – but both are decisions that work. By never quite getting dragged down in fact, in political history or, actually, in anything at all, Tamahori lets his production free-wheel giddily – resulting in a devil-may-care, gleeful and bloody tale that cannot help but drag you, gasping for breath, along with it. So, it’s the late 1980s, and a man named Latif Yahia is ordered to the presidential palace of Iraq. As he picks his way nervously through gleaming doors, ornate decor and beautiful women he is greeted by the wide grin of his leader’s son: Uday Hussein. After being offered a thick cigar and a glass of something expensive, Latif is given an offer: to become Uday’s fiday, his body double. Never dropping his smile, Uday asks him to extinguish his own existence and commit his life to becoming a second Uday, a third son to Saddam. Latif, repulsed by the offer, refuses and is instantly thrown into solitary confinement for a week. Upon being freed – bloodied and beaten – he’s asked again, this time with an added bonus: if he accepts, his family will remain alive. An offer you can’t refuse, eh? With Cooper entirely owning both polar-opposite characters, it takes little to no time for belief to be suspended and for us to be plunged into Uday’s almost unbelievable world of excess. Women, drugs, power, guns; nothing is enough to satiate Uday’s voracious appetite, and as we witness crime upon crime – schoolgirls being snatched from the streets, a bride being raped on her wedding day, party-goers being gunned down as a result of a tantrum – all we can do is gawp in horror. Perhaps the most shocking thing of all is that the worst crimes we see are lifted straight from Latif Yahia’s autobiography, making this an account you simply couldn’t make up. Gilding everything with horrible 80s opulence (not to mention a killer Dead Or Alive soundtrack),Tamahori spins a dark party indeed, never really dabbling in the deeper issues of its protagonists’ politics but having a damn good time all the same. But this is Cooper’s show above all, and credit has to go to him for two astonishing performances. Not only does he have to play two opposing characters – bringing a calm charisma to wary Latif as well as grappling with the ever-bubbling rage of the terrifying Uday – he has to wrestle with the fact that Latif is gradually tormented by psychological shadows of the man he’s forced to imitate; living in constant fear of turning into the monster he despises. Playing opposite himself in almost every scene, it’s difficult to believe a performance – two performances – this slick have burst out of that bloke who played the smarmy one in The History Boys.

The Devil’s Double is by no means a perfect film; suffering from how-do-we-end-it syndrome often seen in pseudo-bios and with an obligatory love-interest that complicates rather than entertains, but the full-tilt ride it delivers combined with Cooper’s performance more than makes up for the flabby final third. A history lesson this isn’t, but as a furious romp filled with sex, murder, greed and fear, you can’t ask for much more.

Previous: The Skin I Live In
Next: The Castle