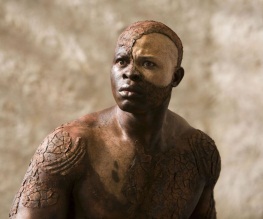 Prospera (Helen Mirren), a dab hand at magic and wife of the late Duke of Milan, was relieved of her right to rule and thrown out of the city by her traitorous brother Antonio (Chris Cooper). After being put in a poor excuse for a boat with her young daughter Miranda (Felicity Jones) they drift upon an island. Years later Prospera is master of the isle, inhabited only by Caliban (Djimon Hounsou) and various spirits who do her bidding, including Ariel (Ben Whishaw). The film opens with the titular tempest called up by Prospera’s art to bring ashore a boat containing her enemies, for whom she has plans, including marrying her daughter off to heir of Naples, Ferdinand.

I would like to start by giving Julie Taymor kudos for adapting The Tempest at all, a difficult play. While wonderfully rich to study, being full of our teachers’ favourites; motifs, themes and (ta da!) issues, it doesn’t really make good entertainment for the casual modern audience. There are no sympathetic or particularly likeable characters, no good ol’ sword fights and the love story between Miranda and Ferdinand is about as believable and interesting as Transformers 2 without explosions (can you imagine??). It may have been intentional on Shakespeare’s part – it is known as one of his ‘problem plays’, after all – but that’s not much reassurance when you’re watching a 2-hour adaptation.

However, Taymor’s decision to cast Mirren in a traditionally male lead was the perfect choice. If anyone can pull off the role, it’s Queen Helen, and she’s fabulous. Her performance is perfectly weighted, a balance between Prospera’s power and the knowledge of her own mortality: “Ev’ry third thought shall be my grave.” And Shakespeare’s script needs hardly any adjusting to adapt to the gender change. It causes some interesting shifts; there is a different resonance to Prospera’s outrage at Caliban’s attempted rape of Miranda, as it is not only the violation of a precious possession but a threat against Prospera’s own sex. Her reliance on the tools of her art – her robe and staff – is emphasised by the physical weakness of her gender. As for the others, Felicity Jones is a very able actress, while Caliban is played marvellously by Djimon Hounsou, righteous anger and passion against Prospera contrasting with his naive eagerness to serve Stephano and Trinculo. Russell Brand does some able clowning but his Shakespeare acting chops aren’t up to much, whereas Alfred Molina, Chris Cooper and Alan Cumming are their usual reliable selves. I was confused by Reeve Carney (currently playing Spiderman in the terminally-delayed Turn Off The Dark), who seems to have appeared on set straight from a performance with the Kings of Leon to do some half-arsed wishy-washy romance stuff. It’s a shame he couldn’t lend some more weight to what is admittedly a thin character.

Taymor gets into the spirit of The Tempest’s more trippy side, with Ariel-induced harpy and hell-hound hallucinations, but these plus Shakespeare’s outlandish plot (and characters doing not much more than wandering around an island) don’t help to involve the viewer. So, despite the beautiful language and several worthy performances, I wanted to have a nap halfway through. In choosing this play to adapt Taymor wasn’t doing herself any favours, so while it was a brave effort (and I am sure the gender swap will be repeated in theatres) it certainly won’t convert any Shakespeare haters. Previous: Trent Reznor backs out of Abraham Lincoln: Vampire Hunter
Next: How Much Does Your Building Weigh, Mr. Foster?