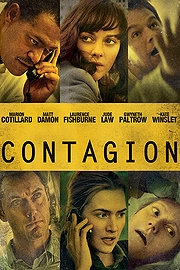 If you’re looking for a director to lead a strong ensemble drama, you’d be pushed to find someone more qualified than Steven Soderbergh. As the bloke in charge of the utterly brilliant Traffic – the 2000 crime-drama that effortlessly explored the illegal drug-trade from a mind-bending number of perspectives – and having dealt with more than his fair share of mega-stars in the confident Ocean’s Eleven (as well as the less confident sequels, but we don’t so much talk about them), it’s a pretty fair bet that he’d sit comfortably in the big boy chair of Contagion. And in many ways, he does. Controlled, well-shot, pacy and thorough; Contagion calmly maps out the worst-case scenario for the human race’s immune system. It’s just that with so many boxes to tick, it’s difficult to really care about any of the characters we glimpse along the way. As with countless global disasters we’ve come across in the past, it all begins with a single action. After a trip to Hong Kong, Beth Emhoff (Gwyneth Paltrow) returns to husband Mitch (Matt Damon) with a bit of a cough and a headache she can’t seem to shake. Before you can say ‘casual xenophobia’ she’s rushed into hospital with uncontrollable seizures, and, much to the surprise of everyone (especially those who know how much Paltrow is worth in screen-time) dies almost instantly. With little to no idea of how or why Beth became infected, the timer is hit in controlling the disease as it begins to flourish across anything and anyone she might have come into contact with. With an apparent immunity to the disease, it’s left to Mitch to protect his daughter from any possible infection, by whatever means necessary. Meanwhile, at the Centre For Disease Control And Prevention, Dr Ellis Cheever (Lawrence Fishburne) and his team (including a frazzled-but-brilliant Kate Winslet and a bored-looking Marion Cotillard) swing into action, trying to maintain a grip on a disease rapidly spiralling out of control. Putting their own lives at risk by organising those contaminated, trying to rush a cure into production and attempting to calm a ever-growing global panic, they’re forced to temper their fears by throwing themselves into work that could save millions.

In another meanwhile in another state, internet blogger Alan Krumwiede (Jude Law in a couple of hoods) is making no-ones’ lives any easier by confidently trumpeting a homeopathic remedy that he promises stops the disease in his tracks. Sick to the (prosthetic) teeth of high ranking officials and their lack of action, he uses his viral clout to send the nation into utter, shop-smashing hysteria. So that’s about half the characters covered, and you can see where this is going. There’s no denying that with Contagion Sodeburgh provides an impressive 360° perspective on a very relevant disaster scenario, but the problem is that in focussing his attention on maximising the coverage, the individual stories leave you cold. With no time, or seemingly inclination to provide an emotional tale on which to build an apocalyptic scenario, instead the star of the show is always the disease itself – effective in creating a truly realistic catastrophe, entirely barren of narrative clout. The characters feel like simply alternative, equally cold look-out points on the same landscape, with a plot that – for all its nuanced shots and classy cinematography – is actually as basic as they come. What Contagion does do, and does very well indeed, is cultivate an air of fear; lingering just a beat too long on unattended water glasses, door knobs, handshakes, ever reminding us of just how much day-to-day contact we take for granted and how easy it would be for disaster to strike. Soderbergh is a master of atmosphere, and with so much dialogue concentrated on pithy-yet-scientific jargon, there is much to be said for the unspoken, itching paranoia he cultivates in his vision of our delicate little world, not to mention his equally delicate audience. You won’t leave the cinema lamenting a single character, but you will spend days worrying about that usher with the cough.