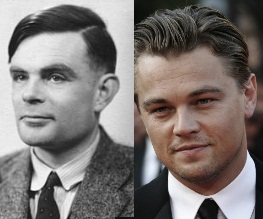 It’s difficult not to be exhausted by Leo DiCaprio’s career. Fresh-faced young drowner in Titanic, tragic hero in Romeo+Juliet, FBI dodger in Catch Me If You Can, paranoid entrepreneur in The Aviator, undercover gang-infiltrator in The Departed – and we’re not even really scratching the surface. The man is an chameleon, so it’s utterly impossible to predict his next move. Helpful, then, that’s he’s told it to us instead. IT’S ALAN TURING TIME.

Apparently fascinated by the legendary maths genius’ story, Di Caprio has been chasing down a biopic script and is keen to get a film into production with Warner Brothers. We’re actually pretty surprised that a big-budget Turing flick hasn’t already come our way; as one of the fascinating mathematic brains in history and key player in WW2 code-breaking (not to mention dogged by an utterly tragic personal life), Turing’s story seems perfect for a cinematic transfer. Well, if anyone’s going to get investors interested, it’s Leo “My Touch Is Gold” DiCaprio. There is already a script in the works (entitled The Imitation Game) by first-time writer Graham Moore, so all we can do is wait and see.

In the meantime, if you’re hankering for a bit of DiCaprio biopic action, you’ve not got long to wait until J Edgar , where DiCaprio will be playing the legendary founder of the FBI. Hitting our screens in January of next year, you can have a peek at the trailer here.