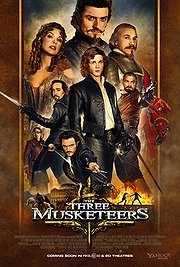 Oh, hello Paul WS Anderson. You’re more or less exclusively known for making video game adaptations and shit reboots, aren’t you? Mortal Kombat, Resident Evil, Alien vs. Predator, Death Race… the list does go on rather. And – nice work, Wikipedia – you’re actually married to Milla Jovovich? Is that why you keep making fucking dreadful Resident Evil sequels, although both she and the franchise are unfit to appear in cinemas? Blimey. D’you know, I literally can’t think of anyone less suited to directing an adaptation of Alexandre Dumas (père)’s iconic novel The Three Musketeers – I mean, you’d probably put your wife in it and everything, wouldn’t you? Stick to working on Resident Evil 27, there’s a dear.

…Paul? Paul? COME BACK HERE WITH THAT AIRSHIP! It’s Ye Olde Olden Days (you can tell from the hats), and cocky Gascon git d’Artagnan (Lerman) is off to Paris to seek his fortune as a Musketeer – his father has entrusted him with a sword, a horse, fifteen crowns and a preposterous American accent, and he intends to make full use of all four. After managing to get himself shot by the villainous Comte de Rochefort (Mads Mikkelsen, for some reason), d’Artagnan arrives in Paris and promptly gets into quarrels with three surly Parisians. Challenging each to a duel, d’Artagnan is surprised when he arrives for his first engagement and finds that Athos (Macfadyen) has brought as his seconds Porthos (Stevenson) and Aramis (Evans), the two other men d’Artagnan was due to fight. After a tussle with some forty of the Cardinal’s guards (duelling not being strictly legal), the four become firm friends.

D’Artagnan discovers that the Three Musketeers were once daring and ruthless agents undertaking impossible missions for France – however, after their attempt to steal Leonardo Da Vinci’s plans for a colossal airship was foiled by the villainous Duke of Buckingham (Orlando Bloom) they were put out to pasture. But once it becomes clear that the power-hungry Cardinal Richelieu (Waltz) is plotting to start a war with England in the hope of displacing the young and foolish King Charles XIII (Freddie Fox), the Musketeers come out of retirement in order to catch the Cardinal’s double-crossing agent Milady (Jovovich) and generally save the day. Which they do. At length. You probably won’t care, though. If I’d seen this film when I was ten, it would have been the best thing in the world. It’s got it all – swords, guns, flamethrowers, improbable aerial war machines, acrobatic fight choreography, bullet-time, one-liners, rooftop duels and heaving bosoms. What it hasn’t got, unfortunately, is even a spark of originality or intelligence. The Three Musketeers feels as if the producers collected up all the cool weapons, vehicles and accessories from the last fifty years of LEGO sets, put them into a carrier bag and then just agreed that whatever fell out would constitute a storyboard – God only knows how else such a torrent of mismatched scenarios could end up jammed into one film.

Whether it’s stealing scenes from Pirates of the Caribbean, shots from Die Another Day, props from The Mummy, lines from The Princess Bride or the entire first twenty minutes from Assassin’s Creed, The Three Musketeers is identikit nonsense from the start. The performances of almost every key actor are lifted wholesale from the madcap 70s comedy version, with Matthew Macfadyen’s unworthiness to lick Oliver Reed’s vomit-stained riding boots particularly obvious. Ray Stevenson is a low-rent Ron Perlman, Luke Evans is a cut-price James McAvoy, Milla Jovovich is (as discussed) literally only there because if Paul leaves her at home she gnaws the furniture, and Christoph Waltz and Mads Mikkelsen need to fire their agents. The less said about Logan Lerman and his stupid bastard hair the better. Meanwhile, Orlando Bloom’s Johnny Depp impression is genuinely embarrassing – it’s like he’s borrowed his dad’s suit and had to roll it up to fit his horrible stumpy childlike legs. I wish I could say that for all its faults The Three Musketeers was at least entertaining. I wish that so much. But, in all honesty, I laughed twice – and both times were (never thought I’d say this) at James Corden, whose character outline was ‘fat and squealy, like a great big talentless hog’. The sequel may be inevitable, but this dull, lazy film is swashfuckling nonsense.

Previous: Contagion
Next: Top 10 Horror Films to See in 2012