The Girl Who Kicked The Hornets’ Nest 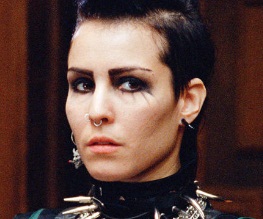 For those who aren’t up to date with the tale so far; Lisbeth Salander is, as they say, in the big shit. Having confronted her evil father and soviet defector Alexander Zalachenko at the climax of the last film, as part three opens she’s being rushed to hospital with a bullet to the head. Zalachenko is in a similarly bad way, having rather inconveniently taken an axe to the face. But stern stuff runs in the family it seems, and father and daughter end up in the same hospital, recovering slowly but surely (but exceedingly vengefully). Lisbeth soon discovers that she’s facing a charge of attempted murder – and it isn’t long before all her old enemies come out of the woodwork in order to ensure she’s permanently locked away in a mental asylum. The only person who can help her is good old journalist Mikeal Blomkvist – he’s determined not only to get Lisbeth acquitted, but to finally expose the dark secrets the Swedish government wishes to lock away along with our favourite sullen hacker. But can the potato-faced Blomkvist get the evidence together in time? And besides, with Lisbeth’s deranged brother still on the loose and looking for revenge, it could it be that prison is the safest place for her…

For a film with so much to say, The Girl Who Kicked The Hornets’ Nest moves surprisingly slowly. The problem is that the crux of Larsson’s tale centres on uncovering secret documents, computer hacking and the power of investigative journalism – and as interesting as that is on paper (it is, honestly) on film it just means we watch a lot of people turn on computers and wait for them to go “beep”. With so much explanation required to get to the bottom of the government conspiracy, Lisbeth’s involvement and the court case itself – as well as a limit of two and a half hours to fit it all in – the script has no choice but to skip over any nuances and simply run full-pelt towards the finish line. The result is a rather unsatisfying framework of a tale that makes us feel like we never really earn the climactic conclusion. There are a couple of scenes that use Larsson’s original dialogue to fantastic effect (Lisbeth’s brilliantly biting remarks in the courtroom leave scorch marks in the air), but these moments feel few and far between – and if anything, reinforce the fact that actually, this tale is a lot more comfy in its original form.

The cast cannot really be faulted, though unsurprisingly Noomi Rapace continues to be far and away the most spellbinding to watch – no mean feat considering she spends the majority of the film lying in a hospital bed. The problem is that we need to see more of all of them, particularly Millennium editors Blomkvist and Berger in order for the stakes to be high enough for us to care about what happens to them.

Despite a difficult script, there’s undoubtedly a lot of skill on show in The Girl Who Kicked The Hornets’ Nest. The film is peppered with moments of unassuming genius, and the final showdown between Lisbeth and her brother is genuinely terrifying in its slow, fumbling calm. All in all, whether or not you enjoyed The Girl Who Played With Fire, there’s much to appreciate in this final excursion into Lisbeth’s world. But I’m yet to be convinced that it’s a world enhanced by the addition of a screen. David Fincher, the floor is yours.