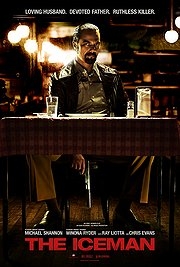 The Iceman tells the true tale of tough guy Richie Kuklinski (Shannon), whose prolific career saw him kill over 100 people from 1948 to 1986. But don’t worry, this guy’s got a heart – no women or children. Vromen’s retelling focuses on the incongruous relationship between Richie’s two lives: his prosperous career as an unflinching contract killer and his perfect suburban life with his wife and daughters, who reap the financial rewards, but are none the wiser.

We first meet Richie Kuklinski in the early 60s, and it is immediately clear that something just isn’t right about this guy. Is it his severe demeanour? His creepy tattoo of the Grim Reaper, carrying a large scythe in its skeletal hand? The moment when he loses a pool bet and expertly cuts some other guy’s throat with a knife that he just happens to be carrying. He’s on a date with the young, naïve Deborah, played by Winona Ryder, doing that small, whispery American drawl she does in all of her films. Weirdly, Deborah doesn’t catch on to any of the signs.

The action cuts forward to the Seventies – the expansion of hair, moustaches and the heels on Richie’s shoes ensure you really can’t miss this. Deborah and Richie are married with two teenage daughters. This life is defined by goodness: the nice house (with perhaps only a hint of Seventies gangster luxury), the angelic children and the dutiful wife who unquestionably accepts her husband’s vague explanations as to why she finds large bundles of cash in his pockets. But Richie is continually depicted in shadows. Now this, to me, seems very telling, it implies he is half good, half bad, it hints to the fact that he’s hiding something. Wait a minute… he’s living a DOUBLE LIFE. Richie’s unblinking exterior has caught the attention of mob boss and fellow psycho Roy Demeo (played by Michael Shannon’s doppelganger Ray Liotta) who supplies his ill-gotten gains in return for a little light killing. Cue montage of Richie shooting people. Lots of people. Over 100 people. But all this killing doesn’t come without a price: good and bad Richie start to merge when he decides to spare a teenage girl (after she witnesses him killing good old James Franco), with devastating consequences. 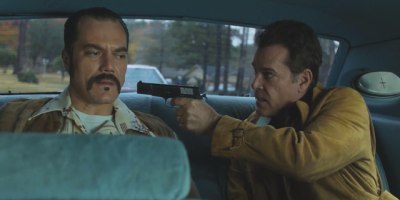 The Iceman is truly a genre piece, to the point that it’s sometimes a tad too familiar (there are more than a few steals from Scorsese‘s Goodfellas, and casting Ray Liotta as the pursed-mouthed sociopath was hardly Vromen’s attempt to distance the film from the history of American crime cinema). Richie is the ultimate, recognisable gangster anti-hero: materialistic, street smart and self-destructive. He is the classic ‘tough guy with a sensitive side’ but Vromen and Shannon provide new intrigue into this archetype: his brief moments of sentimentality and humanity are done with such deliberate coldness that he remains morally ambiguous throughout, you just don’t know what he’s going to do next. We are simultaneously distanced and involved with this man, his tendency for extreme, horrific violence is (for me, anyway) hard to relate to, but we are encouraged to adopt his perspective in other ways. The camera, which never quite seems to stay still, relays his ever growing emotional instability – Richie is unsteady as the image itself, while the low-key, shadowy lighting successfully expresses his inner turmoil.

It’s a shame that this intrigue doesn’t stretch to any of the other characters: Deborah is unapologetically two-dimensional and meek (poor Winona doesn’t have a lot to work with) she likes “being looked after”, wearing fancy things, and being oblivious – that’s all you really need to know. His daughters only serve as symbols of Richie’s fake nice-guy life and (unfortunately for them) collateral. 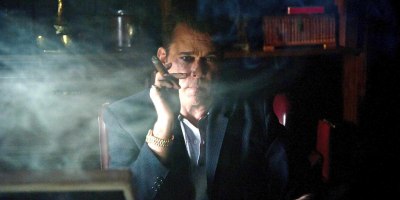 A particularly special moment when watching The Iceman was when I realised that Roy Demeo’s ponytailed, moustachioed side-kick who sounds exactly like Ross Geller was an (even greasier) DAVID SCHWIMMER. This is brave casting; I found it hard not to laugh/be completely appalled when he snorts cocaine and shoots up some drug dealers. ROSS, get the hell away from those drugs! Copious amounts of recreational caffeine with a few friends has been enough for you in the past – what happened to you, man..

For fans of American crime cinema, The Iceman is well worth a watch; dark, gritty, engaging and satisfyingly true to the genre, it definitely deserves the attention it gained at the Toronto and Venice film festivals last year. If you’re just a fan of Winona Ryder, best not bother.

Previous: The Attacks of 26/11
Next: Do Elephants Pray?