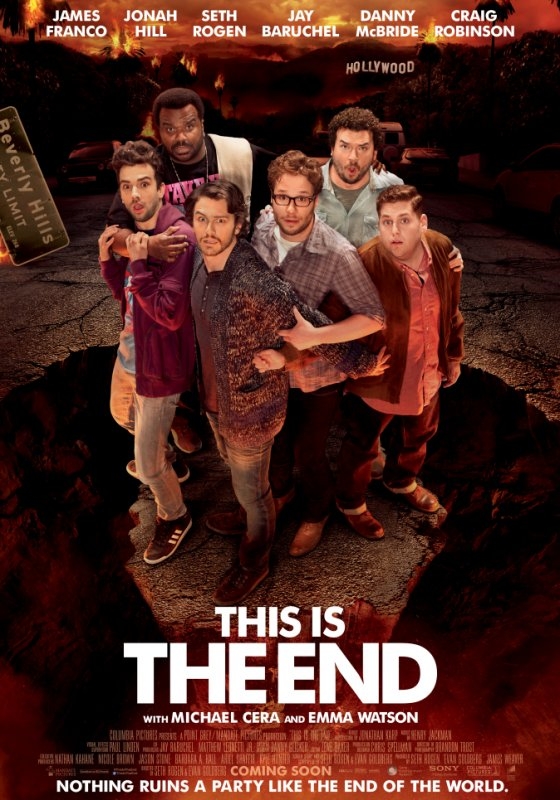 Returning to LA to visit friend and Knocked Up co-star Seth Rogen, Jay Baruchel is looking forward to a quiet night in. Upon his arrival, however, he learns that they have been invited to a party at James Franco’s new house, and, reluctantly, accompanies Rogen across town. Before he can convince his friend to take him home, the house is hit by an earthquake, killing various partygoers and leaving Baruchel, Rogen and Franco holed up in his mansion with fellow actors Jonah Hill, Craig Robinson and Danny McBride.

Based on a short film titled Jay And Seth Versus The Apocalypse, This Is The End sees a number of celebrities left behind by the Rapture. The first act of the movie concerns the party itself, and part of the joy of This Is The End is spotting the famous faces in the back of the scene. Two of these in particular stand out, with the actors in question using the opportunity to subvert expectation and the public perception; Michael Cera plays a depraved and universally despised version of himself, while Emma Watson appears post-apocalypse as a bit of a bad-ass.

This Is The End is at its best when its in meta-mode, using the opportunity to poke fun at Hollywood’s comedy culture the many movies that the net cast have made over the course of their careers. Films such as Your Highness, Green Hornet and 127 Hours are referenced by name, forming the basis of some genuinely funny gags, while sequences in which Franco, Rogen and McBride conceive, and later attempt to film a sequel to Pineapple Express (which was also directed by Evan Goldberg) mid-apocalypse is one of the film’s highlights, as is a running gag in which Franco openly worships the ground that Rogen walks on.

Unfortunately, This Is The End isn’t half as biting as it could be, and much of the running time is dedicated to many of the same gags that their other movies have become infamous for. Some of these do admittedly earn the occasional snigger, but listening to the cast bang on about drugs, drink and masturbation in the middle of an apocalypse does begin to wear a little thin. That said, the setting does gift the film with trace amounts of novelty, and work has clearly been put into the design of the Hellish creatures invading Los Angeles, giving the undeniably talented cast something slightly new to riff on.

Although nowhere near as funny as it clearly thinks it is, This Is The End is nevertheless an entertaining watch with some memorable set pieces (watch out for a particularly inspired parody of The Exorcist). Naturally, however, this won’t be a film for everyone.