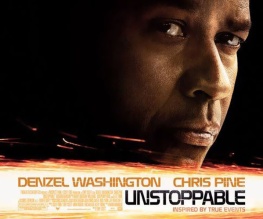 Denzel Washington might seem an unlikely muse to some, but his rugged jaw and Academy Award-winning growl obviously do it for Tony Scott. The Top Gun director has teamed up with Washington for the fifth time, and just in case audiences started to get bored with their bromance he threw a train into the mix. Wait, what do you mean he’s already directed Denzel Washington in a film about a train? Bloody hell. Alright, what about the chap who played Kirk in last year’s Star Trek remake? That’d probably be cool. And cool it is. Unstoppable is a thriller par excellence – a big, beefy, ridiculous seat-of-your-trousers (no Americanisations here, thank you very much) race through action and disaster movie territory with some explosives and a trip to Hooters thrown in.

It’s just another day on the working railroads of Pennsylvania. Rookie conductor Will Colson (Pine) is manning a freight train with veteran engineer Frank Barnes (Washington), a man with decades of experience but only three weeks to go before his compulsory early retirement. Their day looks to be one of low-level animosity and boredom – until another railway employee inadvertently loses control of a train whilst leaving the cab to change a set of points. Normally, this would entail nothing more than an embarrassing jog to catch the train up; however, this is no ordinary ‘coaster’.

The ‘Triple Seven’ train, which at thirty-nine carriages is half a mile long, is under full power and loaded with tanks of diesel and molten phenol – and worst of all, its air brakes are disconnected. As it hurtles through the state at seventy miles an hour, yardmaster Connie Hooper (Dawson) is forced to mount evacuation attempts along the line as her gung-ho boss attempts to blow the train off its tracks. Can Will and Frank catch up with the speeding time bomb before it rockets into their hometown and blows it sky high? I’m not going to tell you, but you’ll have a hell of a time finding out.

I strongly advise you not to start playing the “Unstoppable is like x film meets y film” game, because once you do you will never, EVER stop. Before the film had even finished I was up to “Jaws meets Transformers meets Speed meets The Hunt For Red October meets Armageddon meets every movie ever about hard-bitten bluecollar types and/or TRAINS TRAINS BLOODY TRAINS” – the constant string of comparisons is now consuming more of my brain’s processing power than this review. Tony Scott manages to cram more suspense, danger and even explosions into Unstoppable than Michael Bay can manage when given two armies of sentient robots and a CGI budget the size of Eurasia.

The plot is utterly linear, but since it takes place on a literal line I think that’s understandable. Anyway, linear is good – it’s refreshing to know that the train starts off here, and unless something happens before it gets to there everything is going to blow up – as your manager may see fit to inform you, we all work better with targets. A well-balanced plot which steadily brings the thunder without ever getting too far into utterly-butterly-mental territory is complemented by intelligent and non-melodramatic scripting; nobody is caricatured, emotional moments are treated with unusual sensitivity for an action film, and the altogether cracking cast does its job well.

The camaraderie between Pine and Washington’s characters grows organically and believably whilst the people on the ground (particularly Dawson and delicious supporting actor Lew Temple) are resourceful without being superhuman and panicked without descending into hysteria. Tony Scott’s ever-present disregard for green-screen shows in the spectacular sequences filmed at 60mph, and the gathering menace of the 777 provides an inhuman threat reminiscent of the force of nature in The Day After Tomorrow. A meaty, credible thriller combining hyper-tense action with genuinely enjoyable performances, Unstoppable sets a new benchmark for ticking-clock disaster films.

Previous: November/December Film Events
Next: Depp confirmed for the role of Tonto