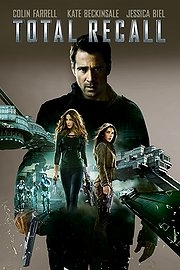 Let’s face it: 2012 has been rubbish. Sure, there were a few decent films out during the first quarter (most notably Joss Whedon’s astounding Avengers), but since then the cinemagoer’s diet has been uninspiring finger buffet of contrived comedies, chemistry-free romances and disappointing sci-fis. Who’d have thought Len Wiseman of all people would be the man to turn it all around, and with a re-make of an old Arnold Schwarzenegger movie no less? 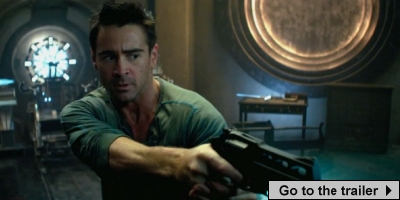 Following large-scale chemical warfare at the close of the 21st Century, the Earth’s population is divided between the two remaining hospitable nations: the United Federation of Britain and the Colony, two populaces connected only by a gravity elevator that dissects the planet. Plagued by nightmares of a mysterious woman (Biel), Douglas Quaid (Farrell) feels that there is something missing from the life he shares with wife Lori (Beckinsale), and his job working on synthetic soldiers for the UFB.

Talked into visiting Rekall by one of his co-workers, Quaid asks to be implanted with the memories of a secret agent in order to sate his thirst for adventure. When the procedure is interrupted by a squad of armed agents, Quaid flees the scene in a sudden display of physical prowess. Met at home not by a loving wife but a sleeper agent claiming everything he knows to be untrue, Quaid is rescued by the woman from his dreams as they go in search of answers relating to his true identity. 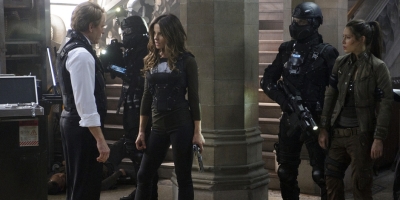 Reinstating himself as an action hero after several years in smaller roles, Total Recall sees Colin Farrell back on top form for his second pass at a Philip K. Dick short story, after Steven Spielberg’s Minority Report. From the Jason Bourne school of dealing with an identity crisis, Farrell’s Quaid ably carries the film through the expository first half into an hour-long action sequence that barely lets up. Beckinsale, meanwhile, reprises her ass-kicking duties from the Underworld franchise, albeit without the leather catsuit and vampire accessories. Although the film tries to introduce a number of other antagonists (Bryan Cranston, of all people), its her Lori who you’ll want back onscreen for the final showdown.

The real stars of Total Recall, however, are not to be found in front of the camera, but behind it. The world created by Len Wiseman is a thing of awe-inspiring wonder, expertly marrying ideas and motifs found throughout science fiction in what is as much a loving homage as a shameless rip-off. With shades of I, Robot, Minority Report and even Serenity, the film creates a world that is at once recognisable and yet utterly, gloriously exotic. With futuristic technologies overlaying a vibrant multiculturalism, the Colony in particular really is a real feast for the eyes. An early chase across rooftops and through roofs allows cinematographer Paul Cameron to take you on a high-octane tour of Wiseman’s creation, his fluid camerawork as much a part of the action as the actors and sets. If only he’d gone a tad lighter on the lens flares. 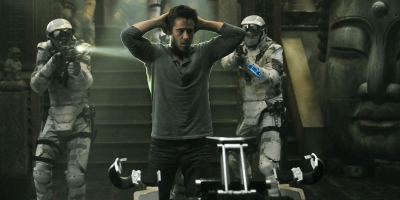 Total Recall is not perfect, then. It relies too heavily on stunning CGI backdrops, lacks the source material philosophical underpinning and stars Jessica Beil in a  leading role. Luckily, however, neither was the original. Different enough from the previous incarnation to justify its existence, Total Recall is an adrenaline-fuelled romp that manages to make up for its disappointing lack of substance with – what is, in my opinion – the biggest thrills this summer has had to offer.