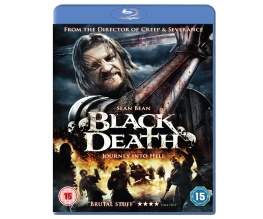 Greenroom are pleased to announce the release of the action-packed Black Death on Blu-ray and DVD October 18th, from Sony Pictures Home Entertainment.

The shadow of bubonic plague (also known as the Black Death) has fallen over medieval England. People struggle to survive in an apocalyptic world filled with fear and suspicion. Young monk Osmund (Eddie Redmayne) is tasked with learning the truth about reports of dead people being brought back to life in a small village. Osmund leads fearsome knight Ulric (Sean Bean) and his band of grizzled mercenaries to a remote marsh to hunt down possible evil. What horror awaits them at their journey’s end?

Is Sean Bean’s character likely to die in Black Death? There is no wrong answer…

1. Yep. Sean Bean’s characters tend to die in pretty much everything. *Cough* Boromir.
2. No! He’s way too handsome/talented/Northern to die.

Previous: Mónica Del Raval
Next: Made In Dagenham