WIN: A Simple Life on DVD

A moving story of unsung heroism and everyday love, A Simple Life reunites Hong Kong superstar Andy Lau (House of the Flying Daggers) with his real-life godmother Deanie Ip. The film made a clean sweep in all the major categories at the 31st Hong Kong Film Awards, and has blazed an award-winning trail since its debut at the Venice Film Festival 2011, where Deanie Ip picked up the Best Actress Award.

A Simple Life centres around the moving relationship between an ageing servant and her employer, now a successful film producer. Ah Tao (Deanie Ip) has served a Hong Kong household for 40 years, and now that most of the family have emigrated to the US, she remains as the dutiful maid to Roger, the youngest son (Andy Lau), sharing his compact apartment. One day Roger comes home from work to find that Ah Tao has suffered a stroke. He rushes her to hospital, where she announces that she wants to retire and move to a nursing home. As the days go by, and Ah Toa’s health starts to deteriorate, the tables are turned and Roger slowly transforms from the detached single man to the devoted carer of an elderly servant, as if she were his mother. 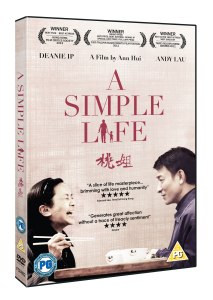 Inspired by real life events, A Simple Life is a low key masterpiece that is affecting but never sentimental, in which Lau and Ip display the chemistry and restraint of two people who have known each other all their lives.

To be in with your chance of winning one of THREE COPIES of A Simple Life on DVD before it arrives in shops and online on November 19th, simply answer the following question:

Previous: World War Z full trailer is out!
Next: Desire to Kill