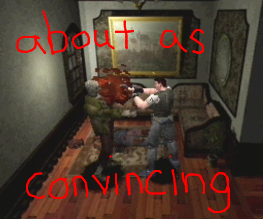 World War Z: An Oral History of the Zombie War is one of the finest books of our generation, written by Max Brooks. World War Z, the movie, has nothing much at all to do with World War Z, the book, except that the Z probably stands for zombies in both titles. Now the full trailer is out, we can see exactly what rotting undead platter we’re being served, courtesy of Brad Pitt.

The carnage does seem to be on an extraordinarily large scale. World War Z does have a lot of shooting zombies, doesn’t it? Isn’t it exciting? On the other hand, it looks fucking terrible. What CGI studio did they use? The tidal waves of zombies look like they’ve been lifted out of the game Dead Rising, which had the added benefit that you could actually control the character on screen. Alas, no such technology yet exists where we could control Brad Pitt’s mind and force him to stay the hell away from World War Z with the push of a button. Although maybe a cattle prod might be just as effective.

Hopefully World War Z will turn out better than this rather disappointing trailer. Someone really should have told them that zombies are out of vogue. It’s all about werewolves now. Our secret informer tells us that much of World War Z was shot in Glasgow, which explains the post-apocalyptic environments and the glazed, bloody look of the extras. Easy way to save on expenses, really.

If you want a really decent zombie scene, definitely check out the first 15 minutes of Argo, currently in cinemas. World War Z probably won’t be any good in a cinema near you when it chews through the tendons of your sanity 21st June 2013.

How did you like World War Z? Good, bloody carnage? Or does the Z stand for zzzZZzzzZzzz…?

Previous: Tom Cruise is in a robot
Next: WIN: A Simple Life on DVD