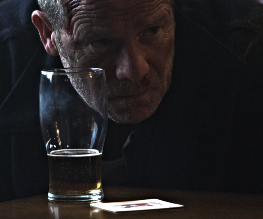 As Tyrannosaur prepares for its DVD release, the movie world is full of chatter about this year’s Oscar nominations. Perhaps predictably, Tyrannosaur doesn’t feature. Maybe it’s appropriate that a film that builds its narrative entirely on the ugly, black unfairness of life should miss out on the accolades it so deserves. Still, you can’t help but think that Peter Mullan wouldn’t put up with this shit. Mullan plays Joseph; a crumple-faced, spittle-glistened Scottish widower, whose furious rages have gotten him into more than a bit of trouble over the years. Occasionally visiting his terminally ill best mate (but only when the live-in daughter will open the door to him), more occasionally getting into fights with the local empty-eyed youths and most occasionally of all ending up slumped, drunk and bloodied, against an obliging wall, he one day finds himself hiding from his own endgame inside a local charity shop. It’s evident that the woman on duty, Hannah (Olivia Colman), isn’t exactly sure what to do with a sullen, foul-mouthed squatter, and seeing that he is a soul in need of aid, offers to pray for him. As you might imagine, this doesn’t exactly go down well. Taking in her expensive attire, the crucifix around her neck and the mounted picture of Christ behind her, Joseph takes no small amount of pleasure in unloading an onslaught of spiteful, bitter insults in the gentle Hannah’s direction – brutally mocking her attempt at any connection with someone like him. The verbal attack leaves Hannah’s face dark, her mouth tight and eyes slowly filling with tears. He storms out of the shop, and there, it seems, it should end. But something, something in the goodness that he mocked so cruelly, draws Joseph back to Hannah’s shop, and when it becomes clear that she is dealing with demons darker than even Joseph can imagine at the hands of her husband (a terrifying Eddie Marsan), the two embark on an unsteady, unlikely friendship. He warily allows the desperate Hannah to cling to the only remnant of hope either of them can find – unfounded, unspoken faith in one another. But Joseph, he is well aware, is no hero. Already dealing with the guilt of a life misspent, surely it can’t be long before his anger – insatiable, unstoppable and ungovernable – rips him and those around him apart. After all, everyone has a breaking point, right? Considering the amount of brutality on display in Tyrannosaur, it would be very easy to assume that the world these characters inhabit is a very dark one indeed. But Considine does not write bad people, rather he creates heart-breakingly real, sympathetic and entirely three-dimensional protagonists whose bad decisions have led them to a point of utter paralysis. Colman’s Hannah is mesmerising; wrenchingly warm yet utterly, irretrievably broken by the atrocities that have befallen her, and her performance gives the film a raw emotional centre that perfectly balances the hardened instances of violence. A scene where her husband weeps on her lap, begging her for forgiveness showcases Colman as an actress at the very top of her game – her blank eyes managing to register weariness, revulsion and disgust even as she comforts him, hating herself for every word she speaks. She is matched perfectly by Mullan’s Joseph; a man never quite aware of the extent of his own flaws, someone unable to live by anything except his immediate emotions. Where Hannah is incapable of action, he is incapable of passivity, and it is in this strange symbiosis that the two find strength in one another. As dark as Tyrannosaur is (and believe me, it is one of the darkest films of the last year), it is the resilience of the human existence that resonates most of all; the gritty, irrefutable fact that it is never too late to escape the life you feel trapped in. Don’t let this film pass you by. It may lack the glitz and glamour that befits Hollywood’s awards season, but it’s infinitely more worthy than almost anything it shouts about. Paddy Considine, we’re very glad you’ve turned up.

Previous: Selena Gomez producing and starring in The Sky Is Everywhere
Next: Cheat Sheet: Ralph Fiennes