Se7en begins like any other crime thriller. Detective Lt. William Somerset (portrayed by the always quietly compelling Morgan Freeman) is the world-weary veteran whose got one week till retirement. Enter Brad Pitt as the ambitious but somewhat naive Detective David Mills, newly transferred in from Up-State, desperate to prove himself and determined to make a difference. Their very first crime scene together looks to most like just a bit of crazy gone wrong. Not to the seasoned Somerset, however, who knows that this is just the beginning. Soon our heroes are on the trail of a vicious and meticulous serial killer who is on a mission to bring the world’s sin from under the shadow of ignorance.

The work of ‘John Doe’ is based on the seven deadly sins: Gluttony, Greed, Sloth, Lust, Pride, Envy and Wrath. Each murder is taken as an opportunity to “turn the sin against the sinner” and Andrew Kevin Walker’s script is nothing short of ingenious in the way it accomplishes this. The victims do not simply endure the repercussions of their sin but are made to become the very epitome of it. As you uncover the reasons for which they were chosen, you find yourself unwillingly sucked into John Doe’s sadistic plan. There is a part of you that doesn’t want him to be caught, at least not until you get to see who the others will be and how they will reach their demise. Walker does something that most people would simply presume impossible: he builds an entire personality, complete with acute intelligence and very real danger, without the use of a body on screen. John Doe doesn’t become corporeal until the last half hour and yet by this point we know him almost as well as we do Somerset and Mills. Their investigation of his crimes leads us to an insight into his mind and as each kill tops the last in brutality and ferocity we become intensely aware of the dangerous nature behind the atrocities. 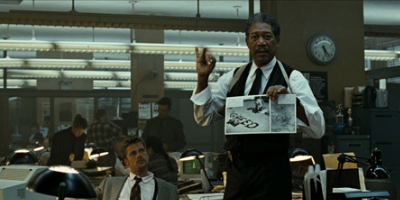 The casting in Se7en is impeccable. I can think of no one else other than Morgan Freeman who can bring the gravitas required for a character like William Somerset. There is a quiet dignity to this character, an insatiable curiosity and a sharp mind that has made him as good as he can be at his job. Freeman portrays all this without even trying. We know without a doubt that Somerset is a man tired to his very bones. Freeman not only embeds this feeling into every single look and gesture but even reflects it in a hunched posture that is akin to carrying the world upon his shoulders. At the same time there is no denying the spark of curiosity that this case incites in him, the way it manages to takes hold of his intellect and forces him to see it through till the end.

In contrast, Brad Pitt plays David Mills as brash and impulsive, foul-mouthed and short-tempered. When we meet Mills he is of an arrogant sort entirely too sure that his 5 years of experience will entitle him to being taken seriously in the big city. As the story progresses, however, so does David’s character with his demeanour taking on a nervous, twitchy quality that mimics his internal frustration and uncertainty. His final scene is a heartbreaking thing to watch and has become one of the most quoted pop culture references of today. Apparently, Denzel Washington was the first to be offered the role of David Mills. I’m glad he refused because as much as I love him I don’t think he could have done what Brad Pitt did. 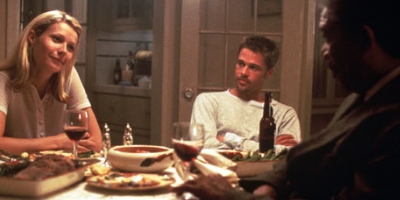 The first time you watch Se7en you’ll be excused for dismissing Gwyneth Paltrow as mere filler. It won’t be until you watch it again that you realize how undeniably important her characterization of Tracy is to the story. Paltrow plays her with a flawless sweetness that acts as a softening agent to an otherwise sharp-edged story. We learn more about Mills and Somerset through their interactions with her and she provides the necessary bridge for a relationship between the two. We like her without even knowing, which makes the ending a much more gutting experience.

I hate to do this, but I’m afraid I’m going to have to go all geek on you now. Respect must be given to the brilliant David Fincher who constructed an atmosphere of charged moroseness. His city is gritty and frayed, seeping with urban decay. This darkness invades your senses and creates the perfect backdrop for this evil story. Watching the movie will make you think of the tagline, “Long is the way, and hard, that out of hell leads up to light”, as all the scenes but the last segment are filmed either in the gloom of rain (no, I don’t care that this was only done for the sake of continuity, it still totally works and thus is perfectly fitting) or the cover of night. This oppressive mood is only amped up by the score which is at times overwhelming in its presence. Howard Shore (who you might remember from the Lord of the Rings trilogy) provides a tense and fierce sound that drags you under and binds you down to the story. Se7en is a perfect example of how the sum of its parts can work to make its whole a masterpiece. 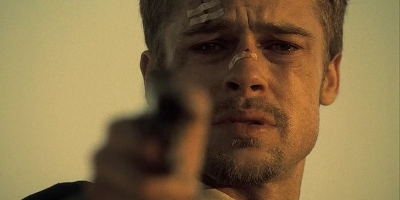 It has been years since I last watched Se7en. And yet I am able to still recall some scenes with almost frightening detail. Any movie that can stay ingrained in you for such a length of time deserves the accolade of exceptional. There is nothing I can fault with here, no irritating plot holes, no embarrassingly weak performances, no disappointing cop-out ending. Se7en is a rare find, an example of true perfection, a thing of morbid beauty.

Do you dare to dispute the brilliance of this movie? Or have we gotten it spot on? Tell us how you really feel.