I first saw The Royal Tenenbaums with my dad at the cinema when I was a wee twelve year old. We didn’t know anything about it, we just liked the look of the poster – an all-star cast arranged like an awkward family photo – all stiff poses and blank, dead-pan expressions. Their eccentric, vaguely retro style made them look like they belonged to a sort of timeless other world. It ended up being one of those great, totally memorable, cinematic moments, which we still talk about today. The Royal Tenenbaums has to be my favourite film because (at the risk of sounding like I don’t have any thing else to do) I have pretty much watched in on repeat for the last twelve years – and I always notice something new. 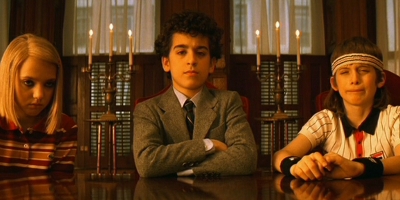 By now Wes Anderson‘s signature brand of whimsical, nostalgic American indie is so recognisable it has become clichéd: the wide angled tracking shots, the wry, dead-pan wit, the meticulously stylised setting – he’s got a thing going and he shamelessly sticks to it. But, there are two things to remember: The Royal Tenenbaums was before he did this to death, and it was when he did it best. In The Life Aquatic with Steve Zissou (2004) Anderson prioritises his kooky style over the story and the characters, so that some of the substance is lost. It becomes all about the intricate retro set and general eccentricity and loses the connection and believability. But, in The Royal Tenenbaums, this same kooky style is gentler and perfectly unified with the narrative so that it provides a greater understanding of the characters and immersion into the world – the style adds to the substance. 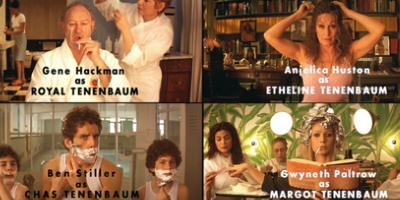 This is exactly what I love so much about this film – Anderson stylishly draws you in and informs you about the Tenenbaum universe from the very first shot: a cheesy, dated library book called The Royal Tenenbaums being stamped out of a library. Through this he introduces all the stylistic traits that come to represent this world: the sickly retro sheen, the meticulously constructed, colourful compositions and the little recurring motifs (like the Futura Anderson font and the little dalmation mice that scurry round the Tenenbaum household). And his style isn’t just “twee” as many lazy Anderson-haters have suggested. It’s off-beat, it’s humerus but it’s also melancholic. We get a sense of the lost grandeur and has-been importance of the Tenenbaum family in this scruffy old volume, and this sense of loss pervades the narrative. 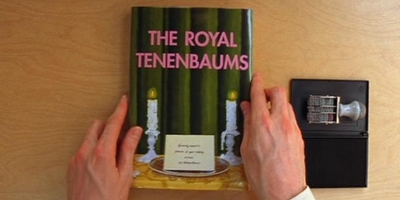 The Royal Tenenbaums is a comedy about betrayal, failure and disaster. The Tenenbaum siblings were once child-geniuses, experts in their chosen fields, but as the years have passed they have become depressed and dismayed adults. Their childhood is recounted in a detailed opening sequence of bizarre vignettes narrated by the deadpan tones of Alec Baldwin. Pause this at any moment, have a good look around and you’ll find so many strange little insights into the Tenenbaum world. Little Chaz Tenenbaum’s fully functioning office/bedroom portrays perfectly that he’s a successful business-child, neurotic beyond his years. He has a “preternatural knowledge of international finance” and so negotiates the sale of his father, Royal Tenenbaum (played brilliantly by Gene Hackman). Royal thanks him by stealing bonds from his safety deposit box and shooting him in the knuckle with a BB gun, starting Chaz’s lifelong hatred for his dad. The adopted, multi-award-winning playwright Margot Tenenbaum is all thick black eyeliner and stoic beauty. Renowned for her mystery, she is a secret smoker and has a finger missing due to an ill advised incident with some rednecks and an axe. She also has a deep hatred for Royal because he insists on introducing her as “my adopted daughter, Margot Tenenbaum”. Richie Tenenbaum, Royal’s favourite, has been a champion tennis player since the third grade, but his obsession with painting Margot’s despondent face hints to his real obsession: his desperate love for his adopted sister. 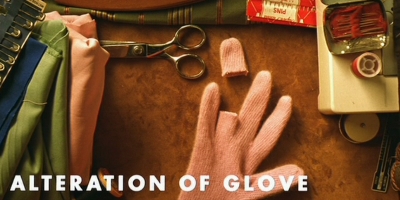 Cut forward 20 years and Royal, a happy-go-lucky con-artist and philanderer, described simply by many as a “bastard”, conveniently decides to make amends with his estranged family after he’s thrown out of his hotel. He does this by dressing up the hotel porter as a doctor and faking stomach cancer. After hearing of their father’s terminal illness Chaz (Ben Stiller), Margot (Gwyneth Paltrow) and Richie (Luke Wilson) move back to the Tenenbaum residence with their mother Etheline (Angelica Huston) and her accountant fiance Henry Sherman (Danny Glover). They are joined by Margot’s unhappy therapist husband (who is badly in need of therapy), Raleigh St. Clare (Bill Murray‘s best and most deadpan performance ever) and Richie’s best friend Eli Cash (played by the walking sight gag Owen Wilson, who also co-wrote the film). Anderson wrote each of the characters with these actor in mind, then just didn’t take no for an answer until they all said yes. This is why it is perfectly cast – each actor embraces the obligatory dry, understated delivery and manage performances of their careers. Gwyneth Paltrow is particularly good, with her smoky eyes, fur coat and secret past. 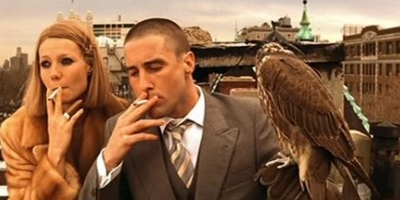 One of the most defining features of The Royal Tenenbaums is the soundtrack – part original score by regular Anderson collaborator Mark Mothersburg, part varied selection of brilliant rock songs from the 60s-90s. The music is responsible for some of the most memorable moments: when Margot and Richie are reunited their eyes meet in conjunction with the plinky plonky guitar riff of Nico’s These Days and Royal’s raucous montage of dangerous and illegal activities with Richie’s smothered children is set to Paul Simon’s Me and Julio Down by the Schoolyard. These moments have become iconic – Elliot Smith’s Needle in the Hay will now forever be associated with Richie staring blankly into a mirror saying “I’m going to kill myself tomorrow”. The music combines beautifully with the other elements to make a totally complete world. 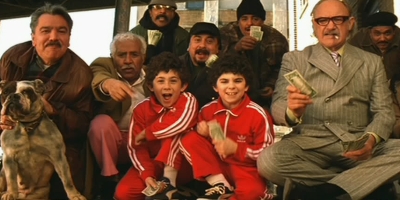 The Royal Tenenbaums is a collection of numerous, wonderful little moments – so it’s really hard to convey why it’s just so great. If you haven’t seen it do not be deterred by the copycats – The Royal Tenenbaums did deadpan dysfunction long before and much better than Garden State, Submarine and Little Miss Sunshine. This is a unique, innovative film because its its own, totally immersive and completely addictive universe, with all of its own rules. It’s touching, subtle, absurd and hilarious. Go watch it immediately.