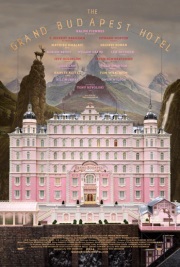 We’re at the point now where, to a certain extent, we know what to expect from Wes Anderson. A charming screenplay, delightful production design, exquisitely composed cinamatography, and a barrel of actors we all wish we could take out for gin. The Grand Budapest Hotel delivers on all counts, as we knew it would, but it ads a certain brutality to the mix, turning it into Anderson’s darkest film to date.

The film opens like a Matryoshka doll, unfolding layer after layer until we get to the story. A story of intrigue and danger, of which a young bellboy with a drawn on moustache is the key witness. The bellboy (Tony Revolori), whose name is Zero, and who has zero experience, zero education, and zero family, comes under the tutelage of the esteemed Monsieur Gustave (Ralph Fiennes), the concierge of The Hotel Budapest. M. Gustave is particular of manner, refined in speech, and daring in action, happily seducing dowagers to ensure their continued loyalty to the hotel.
When one of them dies, leaving M. Gustave a priceless piece of art, her family are quick to retaliate, framing the charming concierge for murder, as they try to find a way around the will. Zero and M. Gustave then have only to hatch an elaborate plan, uncover the truth, and strike a blow for justice.

Anderson has given his imagination full flight for this one; it’s his most improbable story since The Life Aquatic, but given that it’s set in Europe at a time when the improbable was happening, it somehow seems like less of a fairytale than it is. If the world can really become as black as the film reminds you it can, it’s nice to believe that it can also be this magical.

Although the film is a story set in war-torn Europe, rather than one about war-torn Europe, the presence of the growing dark is never forgotten, except by the lead character, who is more interested in his own private concerns. Things are brittle, and in danger of fading. When we’re introduced to the hotel itself it appears as a set piece in a puppet show; beautiful, intricate, and made of cardboard. It’s a charming reminder of the impermanence of the hotel specifically and peace generally. (Being charming about depressing subjects is a particular talent of Anderson’s.)

The cast is a comprehensive list of Anderson Alumni – there’s Bill Murray, Jason Schwatzman, Owen Wilson, Jeff Goldblum, Willem Dafoe, et cetera, et cetera, but there’s never a doubt that this is a Ralph Fiennes show. The sense of fun that somehow made him more terrifying in Harry Potter and In Bruges is the maypole around which everything else dances. He is impeccable, a mustachioed image of courtesy that occasionally, but only occasionally, gives way to darker, emptier things.

In fact, as well as being its central character, Fiennes’ M. Gustave is a reflection of the story itself. It’s like a lavish and decadent dessert that, every so often, includes a mouthful of bitter medicine. There’s Willem Dafoe’s silent and ruthless Jopling, hired to hunt down our heroes before they can reveal the truth. There’s the growing power of the military police. And there’s the transience of youth and of life, as one passes the torch to another, who passes it on again, and again, as each becomes unable to carry it.

It’s not a perfect film; sometimes favourite actors seem to be there simply because it would be churlish to leave them out, and the framing devices (of which there are three) could be considered excessive. But there’s joy in the flaws as well; they simply show that, like the beautiful cakes made by Saoirse Ronan’s Agatha, the film is handmade, and can’t be replicated.

It’s always been difficult to pick a favourite Wes Anderson film. It just got that much more difficult.