First, let me start by saying, I am under no illusions that Dogma is some kind of masterpiece. I don’t think it will one day be selected for preservation (why do they do that anyway? Like if the aliens or terrorists or whatever come attack earth the first thing they’re going for is the movies right?!). I do however, think this film is one of the funniest and smartest I’ve seen and a film that doesn’t date or become tiresome no matter how many times I watch it. I know I’m supposed to pick a semi-obscure foreign film or one of the ‘classics’ but you’re talking to a girl who uses her bra as a pocket. I don’t do the things I’m supposed to do. 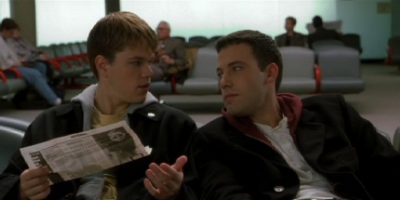 Dogma concerns a pair of banished angels; Bartleby and Loki (Ben Affleck and Matt Damon) are unhappily living out their banishment in Wisconsin when an anonymous source sends them information that could potentially allow them back into heaven. However, as God is infallible and their re-entry directly contradicts God’s ruling, if they succeed it could mean the end of the world. Getting wind of their plans, God’s right hand angel Metatron (Alan Rickman) contacts God’s last living relative Bethany Sloane (Linda Fiorentino) and tasks her with stopping the renegade angels.

Aiding her are two prophets in the form of stoner-duo Jay and Silent Bob (Jason Mewes and Kevin Smith), the 13th Disciple (Chris Rock) and a muse named Serendipity (Salma Hayek). Kevin Smith presents us with countless ideologies that fly in the face of most religious teachings. We learn that Jesus had countless siblings, that there was a 13th disciple that no one ever talks about and that angels are not only anatomically identical to Ken dolls but they swear like sailors. Now, Dogma gets a lot of flack for being blasphemous. It’s somewhat deserved but I highly doubt that the vast majority of the accusants have actually seen the film, because if they had they’d be too busy laughing to have an issue with it. In the interests of fairness though, I will concede that Kevin Smith didn’t really do himself any favours with this: 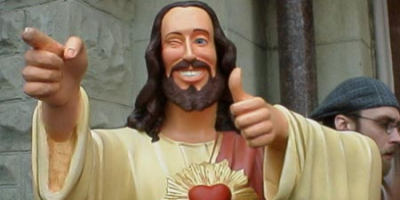 I’m really hoping you’re still with me and the above image doesn’t offend. Because I guarantee that if you actually watched it in context, your outrage would be tempered by the uncontrollable and overwhelming need to laugh. And laugh you should, because even if Kevin Smith gets a little near the mark sometimes, there isn’t one part of this film that isn’t cleverly funny or just plain clever. Kevin Smith writes snappy, thoughtful and intelligent dialogue that had a lot more to say than people gave it credit for. The film is a smart satire of organised religion without an ounce of genuine derision in it. To be honest, Dogma is one of the few films to tackle religion that features a surprising amount of biblical accuracy, and I’ve seen Cecil B. DeMille’s The Ten Commandments. Of course, there is a lot of that flies in the face of that (Kevin Smith proposing that once a month God takes human form in order to participate in Skee ball tournaments is just one example) but he weaves a strangely plausible plot that’s at once entertaining and thought-provoking and shows a great deal of daring from a film-maker who was still relatively new to the film industry.

For a film that has so many fantastical plot developments, the overriding factor that stands out is the dialogue. With unfortunate films like Jay and Silent Bob Strike Bac and Jersey Girl dealing Smith a blow to his career that he has arguably never recovered from, people have forgotten how talented the guy actually is. Forget his later stuff, Clerks and Chasing Amy remain great examples of his snappy, fluid writing and for me Dogma will always be his best. From the moment Bethany voices her concern that she is not a suitable candidate for the mission due to her job at an abortion clinic and is met with Metatron’s dismissive response: “Noah was a drunk, look what he accomplished,” the film is jam-packed with zingy one-liners and laugh-out-loud gags. 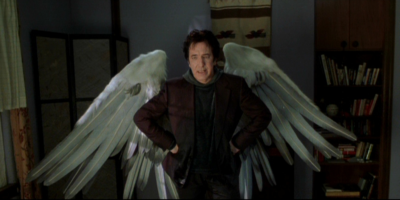 Kevin Smith has a great knack for matching the right dialogue with the right actors. Nobody does banter like Matt Damon and Ben Affleck and every scene between them is pure genius (“That’s easy for you to say, you got to stand there and read at Sodom and Gomorrah while I had to do all the work.” “What work? You lit a few fires?!”) Chris Rock as the unheard-of 13th disciple who feels history has chosen not to acknowledge him because he’s black, turned in the best comedic performance of his life in this (“Did I know Jesus? He still owes me five bucks!). Best of all, Kevin Smith has an equal opportunities approach to comedy; every race and religion gets leveled with a potshot at some point but it’s done with such undeniable intelligence that he gets away with it.

If you view Dogma with an open mind, it has something for everyone. Sure there are some juvenile fart jokes but on the whole it’s a very cerebral comedy that – despite the bad rap it’s gotten – is overwhelmingly pro-faith and conceptually brilliant. Apart from anything else, Kevin Smith manages to tap into an idea that seems to pass the majority of people – Christian and atheist alike – by. If Jesus was who he said he was, and he did the things he said he did, not only was he a freaking rockstar (oh you don’t think so? Why don’t you go ahead and tell me all about that one time YOU converted water into wine huh?!) but he was also a pretty cool guy with a mean sense of humour. Having God be a skee ball enthusiast was just inspired. Having God – arguably the most important role of the film – be played by a woman was an awesome choice. Having that woman be played by Alanis Morissette? Fucking incredible. How can you not be on board with that?