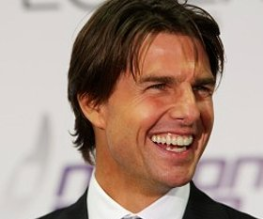 Tom Cruise, the big old ball of crazy that he is, can next be seen unleashing his inimitable brand of mental in Jack Reacher as a homicide detective gone rogue attempting to locate a sniper who has just killed five people. We already brought you news on the first trailer released for Tom Cruise’s latest project and now we bring you a better and longer trailer. See below.

Punching! Kicking! Dark silhouettes of Tom Cruise walking! It’s all so dramatic! The film has already received a lot of negative backlash due to the fact that Tom Cruise in no way bears any physical similarity to the tall and imposing character described in the novels upon which the film is based, but we think everyone just needs to get off Tom Cruise’s back and give him a chance.

Watching this trailer has assured us that Tom Cruise is completely in his element and back to his action-best. Just look at him using his dinky little legs to kick the bejesus out of the bad guys. Look at how in awe of tiny wee Tom Cruise everyone seems to be. See how well they pretend he’s not too old to still be doing stuff like this? How you can you not love the way Rosamund Pike and Daniel Oyelowo look at him when he walks into the office like, “Whose child is this? Is he lost? He’s too short to be in here surely?” We don’t know if you were bemused at the monotonous guitar riff featured in the trailer that sounds suspiciously similar to the Mission Impossible theme tune but we certainly weren’t. Not in the slightest.

No, as far as we’re concerned Tom Cruise is completely right for this part, we totally take him seriously and we honestly don’t know why everyone’s got their knickers in a bunch about it.