Best For Film’s Favourite Flicks #9 – Get Over It

You know what I love? An underdog. Like when some poor unranked tennis player finds himself four sets in against Federer and suddenly I can’t imagine anything I want more than for him to ace his way to victory against that rubber-faced Lindor-eating goon (but let’s not get into Federer here, it’s neither the time nor place). The 2001 teen comedy Get Over It is in many ways the unranked tennis player of the film world – or, to be more specific, of the late nineties/early noughties American high school comedy genre. Frequently, and very unfairly, overshadowed by other teen comedies of the era such as She’s All That and Never Been Kissed (which is actually an extremely inappropriate film seeing how her teacher THOUGHT SHE WAS A MINOR WHEN HE STARTED FANCYING HER), Get Over It should by all rights be celebrated as one of the funniest, smartest and most un-corny teen movies of its time.

From its clever opening sequence (later ripped off by Marc Webb’s 500 Days of Summer), in which a freshly broken-hearted teenage boy walks soberly home from his ex-girlfriend’s house, pursued by nineties pop sensation Vitamin C and the likes of a full marching band, a married couple and all-singing, all-dancing workmen, there’s a sharply ironic edge to proceedings that sets this film apart from others of its ilk.

Ben Foster stars as laconic lead Berke Landers. And make no mistake, he is not your typical teen romcom hero. This is no Freddie Prinze or Heath Ledger. Berke is depressed, bitter and desperate to get back with his girlfriend Allison (Melissa Sagemiller), by any means possible. Whether it’s drunkenly serenading her, trying to sabotage her newfound relationship with boybander Striker (Shane West) or auditioning for the school musical, A Midsummer Night’s Rocking Eve, Berke is a man on a mission. Along the way, of course, he’ll start to fall for another girl – the Helena of this tale, Kelly (Kirsten Dunst) – and face opposition from the musical’s flamboyantly narcissistic director Dr Desmond Forrest Oates (Martin Short). With all that going on AND brilliant supporting turns from Colin Hanks, Mila Kunis, Ed Begley Jr, Swoozie Kurtz and of course the teeny tiny man behind “Thong Song”, Sisqó, how could Get Over It possibly go wrong? 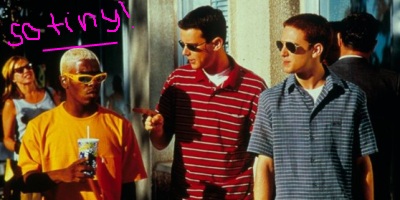 Well quite easily of course by, you know, cramming in the sunglass-wearing jocks and the bitchy girls and the saccharine sweet love story and the magical makeovers. Naturally there’s a bit of all that in there, but it’s all handled deftly by director Tommy O’Haver. Shane West’s Striker is a brilliant take-off of the nineties boyband member with his phoney British accent and cheesy dancemoves, while Allison is a rather more rounded take on the girl villain character than we’re used to. I mean, she has red hair for a start. What’s more, the central romance that plays out between Berke and Kelly manages to largely avoid cringey lines and earnest declarations of emotion. The script – penned by R. Lee Fleming Jr, the man also responsible for the far less sophisticated She’s All That – is frothy, fun and at times a very authentic take on the high school experience. It also features lines such as “Keep icing your front bum. Swelling continues if you don’t ice” and the immortal “Put your hand DOWN little Steve”. I’ll just leave those there for you to think about. 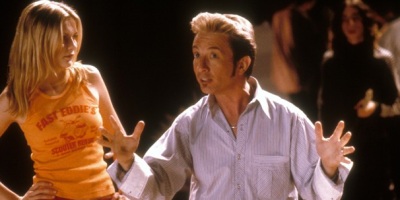 At the end of the day, Get Over It‘s got Sisqó in it. Lovely, tiny Sisqó who at one point dances with lovely, tiny Mila Kunis. It’s also got Kirsten Dunst shooting Ben Foster with a crossbow. And Carmen Electra as a dominatrix. And of course – in the grand tradition of nineties teen movies featuring future Hollywood stars as bit part bitches/jocks (remember Jessica Alba and James Franco in Never Been Kissed?) – Zoe Saldana as Allison’s horrible best friend. IT’S GOT MARTIN SHORT AS A CHARACTER CALLED DR DESMOND FORREST OATES FOR GOD’S SAKE. TELLING PEOPLE TO KEEP ICING THEIR FRONT BUMS.

I mean this is really what it all comes down to. Martin Short. He’s just the best in this film and if I could find a YouTube video of all his scenes in Get Over It edited together I would put that right here but for some reason that doesn’t exist. Where on earth are you, Martin Short fans of the world? Get your act together and start making some Martin Short in Get Over It fan vids (or does that responsibility now fall to me? Am I now officially Get Over It‘s number one fan?). As a result of this serious oversight by the Internet, I’m going to instead treat you to the closing credits sequence which, for some reason, is a duet of “Dancing in September” between Sisqó and Vitamin C. It also happens to be the most delightful thing in the world.

No, Get Over It didn’t change the landscape of modern cinema or anything like that. But – Mean Girls aside – it’s been a long while since we’ve seen a high school romcom of this calibre. Come on, filmmakers. Ditch the po-faced young adult fantasy films and make a good ol’ fashioned teen comedy. With Martin Short in it. And Sisqó. Yeah, that should do it.

Previous: Jared Leto looks like he has AIDS for The Dallas Buyers Club
Next: Nativity 2: Danger in the Manger