Hollywood Rewrites: How To Make a BritBuster 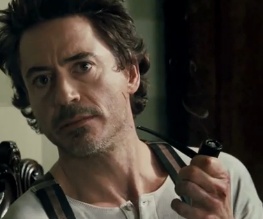 This week, the third trailer for Guy Richie’s Sherlock Holmes came roaring onto the web. The first two brought promises of witty banter between Sherlock (Robert Downey Jr) and Holmes (Jude Law), the wrecking of traditional how’s-yer-father British landscapes and lots of lovely trousers. The third, you’ll be glad to know, is just as exciting. Lots of big explosions, a funny bit with a dog and a few more pairs of trousers.

Now we don’t know about you, but we don’t remember a lot of rooftop chases with guns, knives and Jude Law’s amused chin in the classic Arthur Conan Doyle stories. And as far as we can recall, never did a Doyle heroine sigh frustratedly at Sherlock and Holmes, crying “they’ve been flirting like this for hours“. But come now! Get off your sociologically correct horse! Sure, the original relationship between the two crimefighting companions was fascinating in a subtle ‘oppressed Victorian’ way, but let’s be honest, oppressed Victorians don’t pay the rent. You know what does? Guns. Guns, Big Ben exploding and Jude Law in a nice hat.

It’s time we roll with this trend. Pride and Prejudice? It’s alright and everything, but where are the knife-fights? Wuthering Heights? Too much fog and not enough nudity. We’ve had re-vamped Oscar Wilde novels (The Picture of Dorian Grey), Victorian musical slashers (Sweeney Todd), and now Sherlock Holmes-Does-Die-Hard is ready to descend. What will Hollywood spruce up next? We’ve got some ideas.

The classic Enid Blyton tales of four plucky young nippers foiling evil plans (of mainly smugglers) aided by Timmy the dog. Obviously the cast image would have to change a wee bit. Zac Efron would head up the gang, aided by a wisecracking black guy and a young spritelet with budding breasts and wet lips. Tomboys are so over; George would have to be replaced with a cross-dressing Samuel L Jackson, and they’d be busting up a crack den, not a sandy cave filled with antique rugs. Also Timmy will be a robot. A massive robot with lasers for eyes and the ability to go back in time. Awesome.

How have Hollywood not latched onto this one yet? OK, so Edward Norton plays a messed up scientist stuck in the oppressive-yet-sexually-charged world of the Victorian underworld. The necklines are plunging, the tension is rising and the pince-nezes are poised for action. Upon drinking his own invention, a magic potion (sponsored by Coke- think of the extra special effects funding), he becomes a sex fuelled demon maniac, played by Brad Pitt, but doesn’t realise the havoc he wreaks until it’s far too late. Wait… this is sounding a bit familiar…

Charlotte Brontë is yet to have the star makeover, and we can’t see why. Her tale is one of a young working class girl (Jessica Alba)  brought to serve in the house of the forceful Mr Rochester and discover the murky secrets lurking beneath the velvetty 19th century exterior. With Angelina Jolie as a female Rochester this story suddenly gets a whole lot steamier. Two busty young maidens, fighting their passion for one another whilst a mad old bitch (Megan Fox) stomps about in the attic above. The book ends with the tender and passionate reunion of the blind Mr Rochester and an older but wiser Jane. The film could maybe end with a plane crash into a volcano. Bit more interesting.

Fair enough, this one’s been done before, but justice has never really been done to Mary Shelley’s tale of a man demented by the desire to create the perfect being, and the consequences of his dream. Obviously what Shelley was really going for was the desire of a high school jock to create a smokin’ hottie. Think Weird Science. But combined with a trek across the arctic and an eventual duel to the death between Joshua Jackson and a man-made Mischa Barton. Something for everyone.

OK, so it’s Edgar Allen Poe’s most famous poem, but where is the action? Where’s the fun? In the original, a man is slowly driven mad by a sinister bird that torments him with memories of his dead wife. In our version, Steve Martin stars in a mad-cap adventure, getting hundreds of crazy birds out of his new house before his disapproving wife (Helen Mirren) gets home. Helped out by his hilarious friend (John Goodman), we can almost hear the laughter.

Steve- “When are you goddamn birds gonna get off my George Foreman?”

So grab your top hat, your best china and a semi-automatic weapon, it’s about time that history stopped living in the past. Bringing culture to the masses. Isn’t that what it’s all about?

Previous: Brothers and Sisters – The Complete Third Season
Next: Children of the Damned