The world has gone absolutely crotch-warmingly, pant-wettingly insane for Fifty Shades Of Grey. The novel, which tells the story of Anastasia Steele and her obsessive love for a man with a predilection for bondage and domination, has now become the fastest-selling paperback since records began.

In your FACE, Harry Potter. We bet Rowling is busy Avada Kedavra-ing the day she ever decided to cut out the Snape and Lily sex chapter…

Unsurprisingly, film producers want to turn the erotic novels, which began their lives as Twilight fan fiction (painful, but true!), into a “romantic” story of sexual submission for the silver screen. That’s genuinely happening and, sadly, there ain’t nothing we can do about it. But, if it MUST happen, then it’ll be on our f*cking terms; so which actress will we allow to play Anastasia Steele, the young and naive virgin hell-bent on getting her ass whipped and a one way pass to the Red Room Of Pain? And which actor could ever bring Christian Grey, the sullen millionaire (sullenionaire?) with a taste for torture-based fetishes, to life in the upcoming movie? 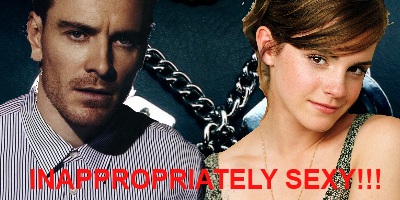 Why would this work? We’re not really sure. All we know is that Michael is a great actor AND he has a particularly large specimen of… erm, ‘Fassbender’, as shown in Shame. Emma Watson, on the other hand, has been busy trying to shed her little girl image by cutting off all her hair, taking up pole dancing and dyeing her pet pooch pink (like a total badass). So what if she’s denied she wants a bite outta the serious bondage bonking blockbuster on offer? We bet Fassbender could (ahem) change her mind…

“At the touch of leather, I quiver and gasp. He walks around me again, trailing the crop around the middle of my body. On his second circuit, he suddenly flicks the crop, and it hits me underneath my behind…” 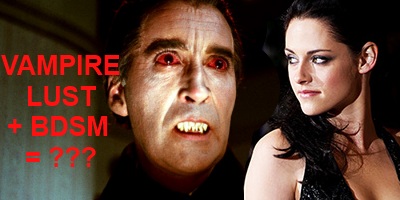 Fifty Shades Of Grey began its life based on Twilight, so there’s absolutely no point hoping that Kristen Stewart won’t have a bite at that casting apple. She got her tits out recently for On The Road – not to mention got down and dirty with the married director of Snow White And The Huntsman (naughty!) – so it seems as if she’s gunning for a bad girl title. So yeah, sure. Let her have a go at being sexed. But we want to make sure that a REAL vampire does the sexing this time around; cue Christopher Lee, better known to his fanged fans as Dracula. SPANK HER, LEE! SPANK HER HARD!

“He places his hand on my naked behind, softly fondling me, stroking around and around with his flat palm. And then his hand is no longer there … and he hits me — hard.” 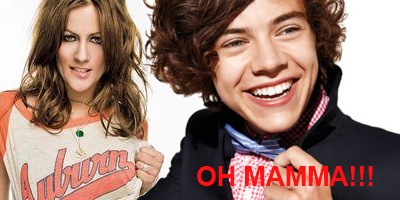 Interesting twist; how’s about we make a stand for feminist theorists everywhere and do a quick switcheroo on the whole submissive-dominant roles? Harry Styles could be a male versh of Anastasia, youthful and (snigger) virginal, hoping to please the older and more experienced (snigger) Caroline Flack. The cougar element would DEFINITELY add a dark matriarchal twist to the baby oil obsession…

“Christian squirts baby oil into his hand and then rubs my behind with careful tenderness—from makeup remover to soothing balm for a spanked ass, who would have thought it was such a versatile liquid?” 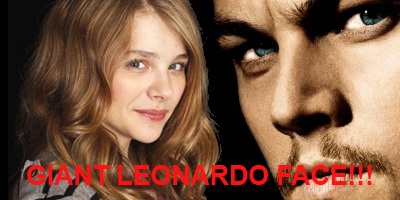 This one’s genius. It’s just… it’s just absolutely fucking genius. Don’t try to deny it; Leo and Chloe would be bloody amazing in the Fifty Shades Of Grey film. But could their incredible talents ever make a CREDIBLE movie?

Obviously we’ll have to wait a few years for Chloe to get all, y’know, legal. Can’t have a 15 year old embarking on this sort of caper now, can we? BUT WE CAN WAIT, GODDAMNIT! We would wait forever, if we had to…

“We lie there, panting together, waiting for our breathing to slow. He gently strokes my hair … Boy … I Survived…” 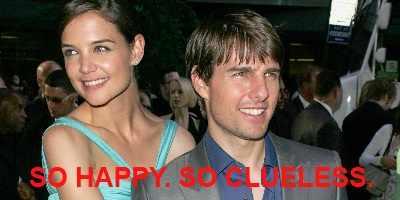 We actually wonder if Fifty Shades Of Grey is a pretty loose true-to-life account of Tom Cruise and Katie Holmes’ failed marriage. Slightly deranged millionaire plucks innocent young girl out of obscurity and introduced her to something… unsavoury. Yes. YES! It’s bloody brilliant!

“What’s wrong? What did that creepy good-looking bastard do?” 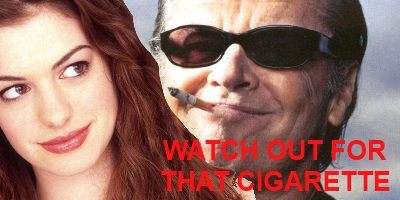 “Some boy scout he must have been to learn these knots.” 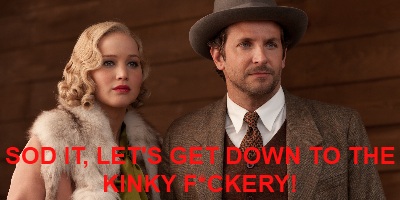 Jennifer Lawrence and Bradley Cooper are already set to star as an ill-matched couple in upcoming period drama Serena. And The Silver Linings Playbook. Why not go for the full hat trick and throw in the sexy (read: not sexy) thrillogy of Fifty Shades Of Grey too? At least she can pepper the man whore with arrows if he gets too kinky for comfort…

“I thought it was chocolate hot fudge brownie sex that we had, with a cherry on top. But hey, what do I know?” 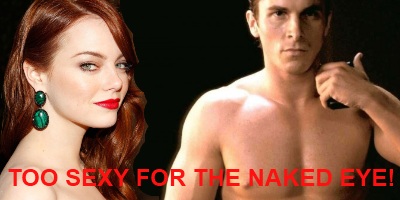 Genius. it’s genius, isn’t it? Christian Bale’s got some free time on his hands now Batman is over and done with (sigh) and Emma Stone hasn’t shown off her sexy side quite yet. Plus she’s dating Spiderman – if ever a gal was set to handle all things strange in the bedroom (sticky hands? No problem!) it’d be her.

“You have dreadful sex hair.” Oh yes, we went there. Don’t pretend you aren’t the teeniest bit interested…

“He then starts on my right foot, repeating the whole, seductive, mind-blowing process. He’s going to kiss me there! I know it. And part of me is glowing in the anticipation.” 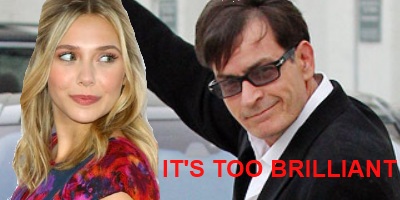 Charlie Sheen. Charlie f*cking Sheen. Surely there could be nobody better prepared to take on the role of Christian Grey than the man infused with tiger blood?

He’s arrogant: “I am on a drug,. It’s called Charlie Sheen.”

He’s sexy: “I don’t have a tuxedo that fits anymore because my chest and my biceps are too big.”

AND he’s more than a little disturbed. Maybe even fifty shades of f*cked up?: “Here’s the good news. If I realize that I’m insane, then I’m okay with it. I’m not dangerous insane.”

Throw in Elizabeth Olsen, one of the best young actresses out there, and you have a recipe for guaranteed success. In fact, we’re going to ring the producers of Fifty Shades Of Grey RIGHT THIS SECOND and tell them to drop everything – we’ve got their cast sorted.

Who do YOU think should star in the Fifty Shades Of Grey movie? We don’t care either. Not really…