With the news that producer Rick McCallum has left Lucasfilm, Best For Film has taken it upon themselves to look back upon the Star Wars Special Editions that came out in 1997, so that you don’t have to. The changes made to the original Star Wars trilogy were so contentious that a cornucopia of fan-edits have appeared on the web. The most ambitious of all of these is the Star Wars: Revisited project by Adywan, whose edit promises to remove the abundance of excess CGI Lucasfilm added under the guidance of Rick McCallum. He also promises better sound editing, better lighting, better everything, which is quite a bold claim. From what we’ve seen so far, these assertions hold up. You can find a list of the 250+ changes Adywan has made to Star Wars: A New Hope here. However it turns out, one thing is undeniable: the Star Wars Special Editions committed several crimes against film-making and against art. Here are our choices for the worst of them; 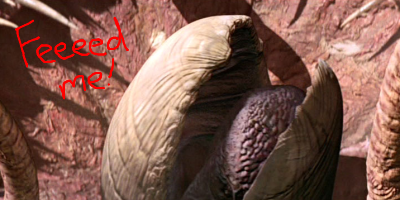 The original Sarlacc Pit in Star Wars: Return of the Jedi had far fewer tentacles and… no horrible CGI beak. The extra tentacles in the Special Edition look OK (at a push) but that beak… wow. It just looks bad. Before, the Sarlacc seemed mysterious and unknowable, a perfect place to spend 1000 years digesting. Here it just looks like a Piranha Plant from Super Mario.

#9 – Jedi Rocks and the disappearance of Max Reebo

You know what? No comment. The video speaks for itself. 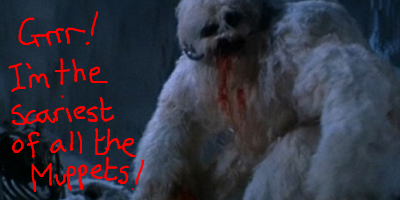 It’s the Special Edition! We don’t have to use lighting to create mood and atmosphere! Things are much scarier when you can see everything in center screen! Take a good long look! Doesn’t it look scary, kids? Booooo!

#7 – Piss poor sound editing in the Battle of Yavin 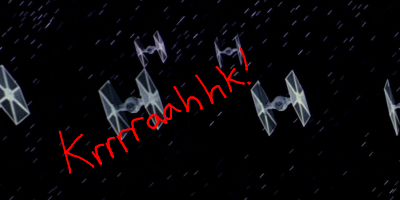 Know what’s awsome? John Williams’ score for Star Wars. He nails every mood, he understands and enhances every musical cue. Know what’s not awesome? How the Special Editions drowns out the amazing score in the Battle of Yavin with TIE Fighters and laser blasts.

#6 – “Alert my Star Destroyer to prepare for my arrival” 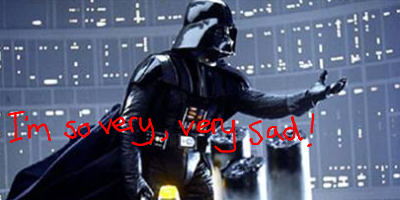 The original line used near the end of Star Wars: The Empire Strikes Back by Darth Vader was a terse “Bring my shuttle!” They replaced the line in the Special Editions with something softer, perhaps to try and convey that Darth Vader was sad or something. Unfortunately, they chose a discarded take of a different line, and it sounds ruddy stupid. There’s a weird rhythm in James Earl Jones‘ delivery, so that Vader almost sounds like he’s rapping. It’s weird. 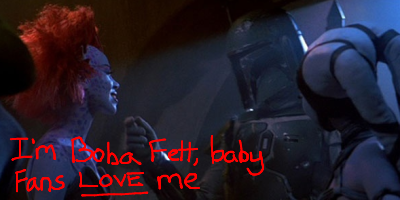 Thanks a lot, fan boys. In one of the many cases where Rick McCallum went nuts trying to please the Star Wars geeks, there is a lot more of Boba Fett in the Special Editions. There are three specific moments of Fettage that feels like a kick in the balls;
1) Boba Fett appears in Star Wars: A New Hope, in the added scene between Jabba the Hutt and Han Solo. He LOOKS AT THE CAMERA.
2) Boba Fett’s single line in Star Wars: The Empire Strikes Back, “As you wish”, has been rerecorded with the New Zealander who turns up as Jango Fett in Star Wars: Attack of the Clones.
3) Boba Fett can be seen on Jabba’s skiff in Star Wars: Return of the Jedi, flirting with two of Max Reebo’s dancers. He looks like a twat in a helmet. 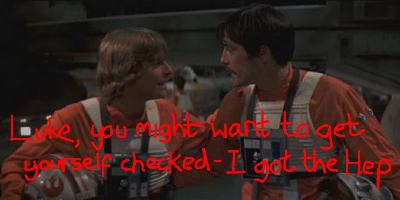 In the original 1977 version of Star Wars, Luke’s friend Biggs is only referred to briefly before his untimely death at the hands of Darth Vader in the Death Star trench run. The moment is sad, but a little odd as we’ve seen nothing of Biggs before this point. Hoping to rectify this, the Special Editions added in a scene (originally removed) between Luke and Biggs before they left for the Battle of Yavin. Unfortunately, the scene is God awful. The film was fine without this scene – it was right to cut it. Alas, we are destined to be haunted by Biggs’ porno ‘tache for all eternity. 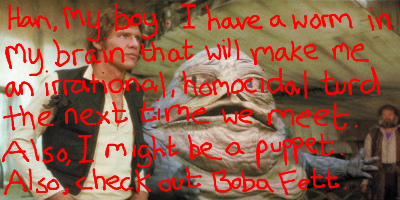 Jesus. What toilet did they find this scene floating in? Lucasfilm made a big fuss about how amazingly talented they were to find discarded footage of Jabba the Hutt in Star Wars: A New Hope, and CGI’d the fuck out of it to get it into the Special Editions. The original footage had some dirty fat human in the role of Jabba the Hutt, so they shoved in the monstrosity that is CGI Slugman. The moment where Han Solo walks around the back of Jabba, apparently stepping on his tail, looks soooooo bad. Who the hell green-lit this thing!? Not only that, but Jabba acts like a creepy uncle. It’s completely incongruous, it’s completely pointless, it’s completely shoddy. Also, this is where Boba Fett stares at the camera. Double whammie! Ugh. 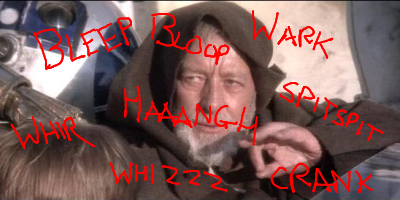 From the very moment that Luke and Ben enter Mos Eisley, they are bombarded with obnoxious edits. They plague the screen like a cloud of midges and refuse to budge. Odd flying robots flit around the screen, bright, shiny and all making stupid BEEP BEEP noises. Banthas crow ceaselessly, droids scream in binary, creatures scuttle about. All of them clamor for your attention, “Please look at me! LOOK AT ME!” and the travesty that is the Special Edition Mos Eisley comes screeching to the climax of Obi-Wan using the Jedi Mind Trick on the unsuspecting Storm Trooper – except that now you can barely hear one of the most beloved lines in all of cinema history because they’ve shoved in a cacophony of pointless sound effects.

Of course this had to be no. 1. It’s ridiculous. The CGI is ridiculous first off, Han seems to contort weirdly, like a spider being burnt (BFF does not condone spider burning in any form, unless they’re really yucky), but that isn’t even the biggest problem we have with the edit. Star Wars follows the pattern of the Hero’s Journey, and Han Solo is obviously the figure of The Rogue. By the end of the trilogy, Han has undergone a personality change, from a selfish smuggler to a loyal friend. First, however, he must play the part of scoundrel who crosses the line between light and dark. Han shooting Greedo without warning is not only a part of his character, but makes his reformation by the end of Star Wars: A New Hope that much more gratifying. By making Han shoot second, in retaliation, George Lucas is trying to make Han a more moral character from the very start, which makes him a worse character. Goddammit, Lucas! Go take a lesson in story-telling. 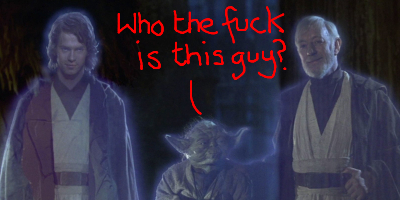 Can you remember being a child who loved Star Wars? You’ve spent years watching the old films on VHS, reading the silly extended universe books, stroking your enormous poster of the Star Wars galaxy. Finally, the DVD box set comes out in a lovely golden box! It’s so beautiful! You can finally watch a high-quality version of Star Wars whenever you so desire.

You make it all the way to the end of Return of the Jedi. And then?

In his last act before retiring from Star Wars, George Lucas decided to stick it to the fans one last time in the Blu-ray release. He was told that people found the “Noooo!” from the end of Star Wars: Revenge of the Sith to be utterly ridiculous but, instead of going back into the prequels to alter the Noooo! that everyone hated, he added an extra couple of stupid Noooo’s into Star Wars: Return of the Jedi.

“You don’t like the No? Here’s a couple of extra ones. You didn’t like missiles in Attack of the Clones? Here’s a few dozen in Revenge of the Sith. You didn’t like R2-D2 having jet boosters? I’ll throw it in again, why the hell not? You thought that Chewbacca’s Tarzan scream in Return of the Jedi was stupid and broke the 4th wall? I’ll throw in two wookies doing the exact same thing on Kashyyyk. Also, Yoda is best friends with Chewbacca. Also, Darth Vader built C-3PO. Also, here’s baby Greedo hi-fiving some kid on Tatooine. Also, I fucking hate you and will do everything in my power to ensure that Star Wars can no longer be taken seriously.

What moment in the Star Wars Special Editions made you scream bloody murder? Let us know in the comments below!