And by that we mean, he doesn’t do perfection in his characters. These guys are hopelessly flawed, entertainingly human and utterly believable. Take, for instance, Nathan Fillion’s role as Captain Mal Reynolds in Firefly. He’s the lead. He’s the HERO of the show, damn it – but, rather than give us a cookie cutter Disney prince, Whedon gives us… well, he gives us this.


See what we mean? And that’s because the reality of what it means to be a hero is completely different to the Hollywood ideal. Whedon himself sums it up pretty well: “The thing about a hero, is even when it doesn’t look like there’s a light at the end of the tunnel, he’s going to keep digging, he’s going to keep trying to do right and make up for what’s gone before, just because that’s who he is.”

THAT, my dears, is a running Whedon trend – realistic, identifiable and (maybe this is just us) wildly shaggable characters.

#9 – He DOES do strong female leads


Joss Whedon is a fully paid up member of the girl power club, albeit an infinitely cooler and more eloquent one than Geri Haliwell. Think Buffy The Vampire Slayer‘s Willow, Tara, Buffy, Drusilla, Dawn, Anya and Glory. Think Firefly‘s Zoe, Kaylee and Inara. Think… well, just think, okay. And Whedon’s reason for working the feminist vibe into his movies is so simple – ready?

Interviewer: So why do you write these strong female characters?
Whedon: Because you’re still asking me that question.

YES! God yes. But, more importantly than just doing great female leads, Whedon also surrounds these women with men who not only have no problem with a strong female, but who are also engaged and even attracted to the idea. We love that – we want to see more of that from writers and directors everywhere, okay?

Which is great. We’d quite like to see a big musical interlude in The Avengers 2 actually, à la Buffy‘s Once More With Feeling:

With so many celebs filling up Twitter with every single thought inside their brain, it’s hard to keep track of which ones are worth following. So, when Joss Whedon swapped the Whedonverse for the Twitterverse, we were concerned he’d be revealed as the sort of celeb to update us on what they’re eating for lunch. If that had proven true, we might have had to eschew social media forever.

But, thankfully, Joss is just as irked by celeb culture as we are. Take this tweet of his as a case in point:

I'm on a plane! I'm having tea! I'm wearing shoes! This is how twitter works, right? I tell you guys EVERYTHING. Great! #syphilis

Not always. Not always, no. But Joss Whedon, rather like Quentin Tarantino, knows the value of an awesome actor-director relationship, which means a lot of his best actors will crossover to plenty of different shows and films. Chris Hemsworth did Avengers Assemble AND The Cabin in The Woods. Nathan Fillion did Firefly AND Buffy AND Much Ado About Nothing AND Dr Horrible’s Sing Along Blog. David Boreanaz did Buffy AND Angel. James Marsters did Buffy AND… you know what, we think you get the picture. Essentially, Whedon forms amazing working relationships with his cast, becomes friends with them off-set and continues to collaborate with them on consistently wonderful projects.

#5 – He DOES write amazing dialogue


The thing about Joss Whedon is this; his characters are the MOST important part of any movie or TV show, always. Take, for instance, Avengers Assemble; how does the show go on when so many already well-known and loved characters are thrown together? Because director Joss Whedon is an absolute genius, that’s how. Instead of focusing his lens solely on the action sequences (of which, we don’t deny it, there are a LOT!), Whedon points it firmly at his characters.
Take Buffy; it could be the end of the world (as we know it) but the tension is shown through character development. One of the best moments in the series is, arguably, that in which Willow attempts to destroy the world. Big drama, eh? But, rather than focus his camera at the catastrophe on a global scale, Whedon makes things more personal. Willow’s best friend Xander arrives and the pair bicker and reminisce and, in the end, disaster is averted – and it’s all down to the power of friendship. It’s relatable. The dialogue is raw – and it’s moments like this that you see why Whedon has built up such a huge fanbase.

A lot of directors think humour is a tension killer but, applied in the right doses (and in all the right places), it can infinitely improve almost any script.

“There’s a reason Tony Stark makes fun of Thor, and mentions Shakespeare in the park in Avengers Assemble. It’s great to play high drama and comedy alongside a modern story.”

Whether it’s Tony Start poking Bruce Banner with a stick to see if he Hulks out, or a torture scene peppered with two love rivals battling it out, Whedon has mastered the art of a… whaddaya mean, you haven’t seen the torture scene? It’s in Firefly – go watch the episode entitled War Stories and tell me that isn’t an amazing show. Go on, I’ll wait.


See what we mean? We spent hours, days, weeks, months and YEARS of our lives trying to figure out what all that meant, before Whedon revealed that the Cheese Man was meant to be a meaningless and absurd character – he has no tricky subtext or symbolic significance. Oh Whedon, you so sly.

We’re always looking for some inspiration in life and Whedon, who struggled to make a career out of what he loves to do best, provides bucketloads of the stuff. Why does he write? Because he LOVES writing – not to make money, not for fame, not for worldwide success. For him, the lucky sod, those are just by-products of his talent:

“I love to write. I love it. I mean there’s nothing in the world I like better, and that includes sex, probably because I’m so very bad at it.”

Well said. We reckon we all ought to start doing what we like doing most more often. After all, you’ll never become a great success if you don’t put in the legwork first. And nobody wants to do the legwork if it isn’t 100% enjoyable. 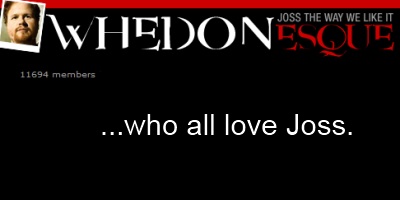 From working on hit TV shows such as Buffy The Vampire Slayer and Firefly, to awesome but lesser known films such as The Cabin In The Woods, Whedon already has a very loyal (if very select) fanbase. And, despite the fact that his name is now synonymous with the biggest blockbuster of 2012 (yes, Avengers Assemble), that isn’t about to change. Just check out the special message Whedon posted to his fans over at Whedonesque, thanking them for their long-term support and poking fun at his newfound stardom at the same time:

“People have told me that this matters, that my life is about to change. I am sure that is true… What doesn’t change is anything that matters. What doesn’t change is that I’ve had the smartest, most loyal, most passionate, most articulate group of — I’m not even gonna say fans. I’m going with “peeps” — that any cult oddity such as my bad self could have dreamt of.”

Previous: Prometheus 2 finally gets a writer
Next: Anchorman: The Legend Continues trailer – MAKE IT STOP