Bret Easton Ellis has FEELINGS about Fifty Shades of Grey 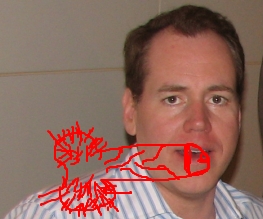 Flagrantly cyber-pissing all over the achievements of gay thespians everywhere, American Psycho novelist and rejected 50 Shades of Grey screenwriter Bret Easton Ellis came out on Twitter yesterday morning (loljk, this particular self-loathing social infidel came out as bisexual about a decade ago) and launched into a series of increasingly vitriolic tweets about Christian Grey’s casting in the upcoming film.

Twitter has been aflutter with musings on who should play the (creepy, misogynistic, abusive, ginger) sexpot Christian Grey; Matt Bomer, who we loved in Magic Mike and who more or less carries the USA network which airs his successful crime serial White Collar on his big gay shoulders, has come up. We’ve seen him naked, have ascertained that he is bangable enough that we would probably pay money to watch him sex up a brick wall; that’s all the BFF team needed to know. Ellis, however? Exhibit A: 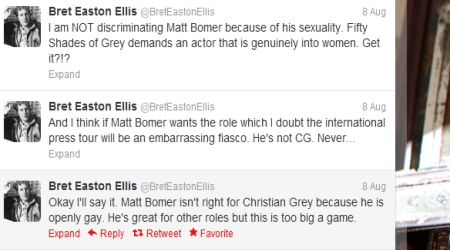 Having been a longtime resident of the so-called glass closet (along with Jodie Foster and Queen Latifah), Matt Bomer came out a few months ago, to little surprise and minimal fanfare – he’s had a husband and kids for aeons. The glass closet exists because of opinions in power such as Bret Easton Ellis’ – that being gay is some sort of disability to overcome, rather than an irrelevancy to the job much like, oh, we don’t know, heterosexuality. Who people are sticking it in isn’t any reflection on their ability to do their job; if it is, they’re not doing it right (cf. Kristen Stewart).

Despite how angry and saddened we are that in a country which so prides itself on liberty and justice for all, there are still such powerful voices bringing the cause down to their level, we pity Easton Ellis. When American Psycho was released, he deliberately sat on any speculation as to his sexuality for fear that people would think less of the book if they knew the author was gay. What a sad world to build around yourself, when there are people who have laid down their lives to help make sure he doesn’t have to.