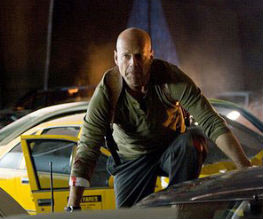 Yippie Kay Yay, action fans, 20th Century Fox is talking to writer Skip Woods about penning the fifth Die Hard movie. Elderly action star Bruce Willis hinted in February that he could be back as John McClane in a sequel to 2007’s Die Hard 4.0 (Live Free and Die Hard to all you Americans out there) and since that movie made $378 million worldwide, you can’t blame Fox for wanting to milk a bit more money from the Die Hard cash-cow. Moo!

Woods is well versed with writing mindless action movies, his screen credits to date include Swordfish, X-Men Origins: Wolverine and the upcoming A-Team movie. A more pressing matter is whether or not Willis will still be able to run about in his vest shooting people without taking a nice long nap every ten minutes. The man’s 55 now, and by the time this film gets made he might be pushing 60, not the typical age to go on a terrorist killing spree. But hey, if anyone can do it, it’s John McClaine.

What d’you think, Die Hard lovers? Does the prospect of Bruce Willis donning the vest again make you scream Yippie Kay Yay or Yippie Kay Nay? Let us know below!

Previous: Vaughn and Goldman on board for next X-Men
Next: The Men Who Stare At Goats: DVD Review