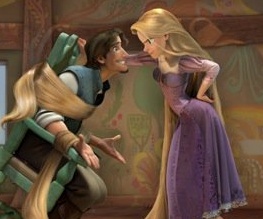 Disney has revealed – via Facebook of all places – that’s its 2010 release based on the story of Rapunzel is going to be entitled Tangled. It could spell the end of the Disney tradition of naming their films after their central character, as it seems that the studio is worried that calling the film Rapunzel would alienate boys and prevent them from wanting to see it.

Roy Conli, the producer of the film, also talked a little about the story, though it’s not much we don’t already know (damn those tight lipped Disney types!) He stated that

“In our film, the infamous bandit Flynn Rider meets his match in the girl with the 70 feet of magical golden hair. We’re having a lot of fun pairing Flynn, who’s seen it all, with Rapunzel, who’s been locked away in a tower for 18 years.”

All we know so far is that the sweet-voiced Mandy Moore is playing the hairy maiden, and that it’s set to be released later this year. Many fans have already lamented the fact that the fairytale has not been made with 2D animation after the stonking success of The Princess And The Frog. Tangled will follow type and will be released in all the 3D pixilated glory we’ve come to expect from kids flicks. But we reckon we’re gonna see a re-surge of the 2D animation after Princess went down so well with fans, even if we’ll have to wait a while to see it happen.