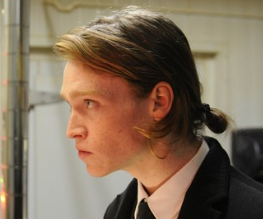 Now, we know what you’re thinking- Brandon? Who in the name of body-maiming is this Brandon? David Cronenberg is what we know, and we’ll be DAMNED if we’re going to let someone have the last name of someone else who already has that last name. First of all, stop sounding mental, it’s only Tuesday. Second of all, Brandon Cronenberg is the son of the legendary director David Cronenberg – championer of the Body-Horror genre whose films including The Fly, eXistenZ and the infamous Videodrome. And by all accounts, Cronenberg junior has a similar outlook on film-making as his Pa. Worrying? Yes. Exciting? We’d bet our probably-horribly-mutated right arms.

Brandon’s first feature film, Antiviral, seems to embrace the dark themes of body manipulation and mutilation that categorize his father’s most famous films. The synopsis (courtesy of Twitch Film)goes as follows: Oh dear. What exactly are you growing in those jars, Caleb Landry Jones of X-Men: First Class fame? We feel itchy and unhappy already. Hurrah!