First image of Edgar Allan Poe in The Raven 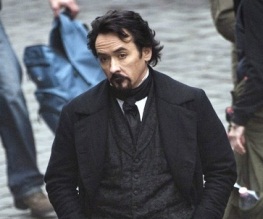 “From the director of V for Vendetta” is not a phrase we hear often enough for my liking. An expertly shot and endlessly compelling movie which, somehow, survives Natalie Portman’s British(ish) accent, I find myself moved and entertained every 5th of November when I indulge my borderline obsessive compulsion.

Thankfully, however, James McTeigue is back with The Raven, which follows the hunt for a serial killer apparently inspired by the writings of Edgar Allan Poe. With the police struggling in their investigations, John Cusack’s Poe joins the search. The first image of a goatee’d Cusack in costume can be seen below. At most, this promises a new slice of annual entertainment, at the very least it promises a new favourite John Cusack performance. No small feat considering the sole contender is 2008’s Igor.

Previous: Warner Bros. to re-make The Wizard of Oz!
Next: Skyline