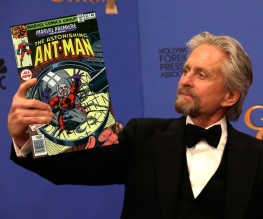 Well, this is MARVELLOUS news – double Oscar-winner Michael Douglas will be donning the telepathic helmet of Dr Hank Pym for Marvel’s Ant-Man, due out next year.

The identity of Ant-Man, one of our favourite Marvel heroes, has been hotly debated for months, with director Edgar Wright’s teasing test footage providing no hints to the identity of the genius scientist who can manipulate his size.

Last month brought the news that Paul Rudd was due to star in the film, but we struggled to get on board with the idea of the Anchorman star as a pioneering chemist. The truth, however, couldn’t work better. Hank Pym is the first man to go by ‘Ant-Man’, but Rudd’s character Scott Lang – a streetwise techie and former thief – later took over the role. We’re hoping this doesn’t mean that Douglas is killed off at the end to leave Rudd in the running for The Avengers 3.

Presumably Pym will be presented as, more or less, Norman Osborn to Lang’s Harry, devising the concept of Ant-Man but handing the reins over to his protégé. Or could Lang be trying to wrest the secret of Pym Particles from a twisted, evil Hank? He did beat his wife in the comics, to be fair. We don’t know, but that won’t stop us speculating for the next eighteen months!

What do you make of this casting? Let us know below!

Previous: Top 10 series-redeeming threequels
Next: Top 10 most WTF casting decisions of all time