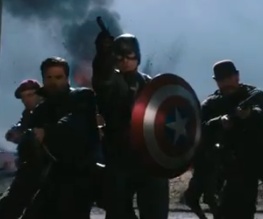 This is exactly why we sometimes feel like trailers are crap. A new videoplug for Captain America: The First Avenger has debuted ahead of its release in just over one month, and we don’t really feel like we need to see it – everything, every single bloody thing that happens in the bloody film, is spelt out over the course of this trailer or the last one.

Right, so what do we know? Steve Rogers (Chris Evans) is a 90-pound asthmatic who demands to be allowed to die for his country, is let onto Tommy Lee Jones’ army base on the recommendation of Ex-Nazi Stanley Tucci. He demonstrates that he’s more than the average meathead and his background as a skinny runt will apparently make him appreciate being megaBUFF all the more, so he gets pumped full of magic drugs to make him appreciably metahuman. The BuffLab is blown up before any more super soldiers can be created, so it’s up to Steve to go after megalomaniacal Nazi scientist Hugo Weaving/Johann Schmidt/Red Skull, whose inventions apparently include stealth bombers and laser rifles. Also, there is a girl. Can we go home yet?

Mind you, ‘Heroes Are Made In America’? Damn good tagline. Damn good.