New Men in Black 3 clips are a bit lacklustre 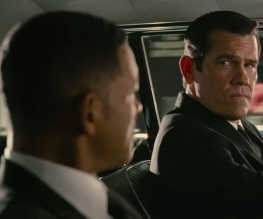 Look, this is just getting ridiculous. Men in Black 3 is out literally this actual week, but for some reason Sony has elected to release FIVE new clips of the progressively less anticipated threequel. And they’re… y’know, they’re alright. Nothing special. We can scarcely bear even to think such blasphemy, but we don’t actually think MiB3 is going to be very good…

Look, just have a watch:

This one’s worth it for Josh Brolin’s uncanny Tommy Lee Jones impression.Ooh, aliens getting blown up. Blah. Very 1997, guys…Brolin again. His TLJ impression is going to be the highlight of the film, isn’t it?This is genuinely boring. How do you make a monowheel chase boring?Alright, we love this. One out of five, Fresh Prince. That’s not so great.

Are you excited about Men in Black 3? Then WAIT FOUR DAYS AND GO TO THE BASTARD CINEMA.