Nicholas Hoult and Michael Shannon sign on for The Young Ones 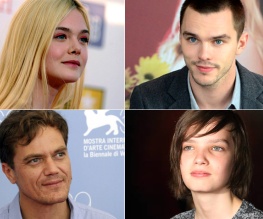 Nicholas Hoult (A Single Man,X-Men: First Class) and Michael Shannon (Take Shelter) have signed on to star in The Young Ones, a futuristic thriller directed by Jake Paltrow, Gwyneth Paltrow’s brother. Also starring are Elle Fanning (Somewhere, Super 8) and Kodi Smit-McPhee (Let Me In).

The story centres on a 14-year-old boy who is forced to use his wits to survive. It will be set “in a violent near-future where water has become the most precious—and fastest-dwindling—resource on the planet.” Shooting has already started in South Africa’s Northern Cape desert. From the sounds of things, Smit-McPhee will play the 14-year-old boy, although the other roles are still unknown. Producer on The Young Ones, Michael Auret, says that the film will be an “engaging tale of hope and courage in a neo-realistic dystopia,” and that it will have a “universal appeal”.

Nicholas Hoult has recently finished filming Mad Max: Fury Road, and will star in the new X-Men film, X-Men: Days of Future Past. His latest films to hit cinemas are Warm Bodies (out from today) and Jack the Giant Slayer, due out on March 22. Michael Shannon meanwhile, has had parts in Machine Gun Preacher and Boardwalk Empire.

Do you like the sound of The Young Ones? Let us know below.