Riseborough and Kurylenko join Tom Cruise in Not Oblivion 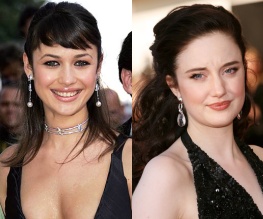 W.E. star Andrea Riseborough and Bond girl Olga Kurylenko have signed up for Universal’s currently-untitled sci-fi epic starring Tom Cruise (it used to be called Oblivion, we don’t understand why it isn’t any more).

The graphic novel on which the film is based (the graphic novel is still called Oblivion, so why can’t the film be too?) casts Cruise’s character as the last human alive on a post-apocalyptic Earth devastated by interplanetary war. Then he meets a girl who falls out of the sky in a spaceship, obviously, and shit goes down because that’s what happens when a FEMALE busts into Tom’s lad pad. No word on which of the actresses is to be his unscheduled visitor, but we’re guessing the other one will play the Borg Queen or something.

Joseph Kosinski (Tron: Legacy) is directing and the script is currently being redrafted by Michael ‘Little Miss Sunshine‘ Arndt. The film is due out next July, which should give the boys in the back room plenty of time to come up with a new year. May we suggest ‘The Last Cultist‘?