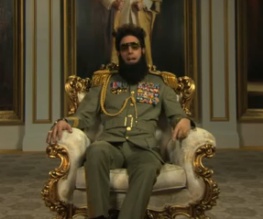 In the wake of the controversial decision to ban Sacha Baron Cohen from this weekend’s Oscars (he was going to turn up in costume and cause some shit, apparently), the controversial Middle Eastern leader Admiral General Aladeen has released a video condemning the American Academy of Arts and Zionists. That got a bit confused, didn’t it? We were going to pretend that Aladeen was real, but it was too complicated after we’d already mentioned Baron Cohen (who is real) early on. Oh well.

We rented Planet of the Rapes a while ago. It gets pretty hairy.

Should Sacha Baron Cohen grow up and stop playing fancy dress? Let us know below!